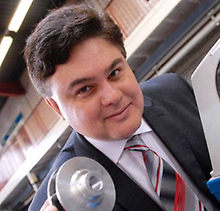 Plans for the potential use of tidal power systems for electricity production along the UK’s northwestern coast are heavily dependent on the talent and research activity being conducted by a Greek scientist, a feature article in Times supplement “Business Insight” has noted.

The scientist, Greek-born Dr. George Aggidis, a resident of Kendal, just north of Lancaster, who heads the Renewable Energy and Fluid Machinery Group at Lancaster University, is rated as one of the world’s leading scientists in the field of tidal power research.

The research work being conducted by Dr. Aggidis has formed the basis of a campaign launched to promote the concept of applying tidal power technology along the UK’s northwest coast. The campaign is being supported by the North West Business Leadership Team (NWBLT), an independent group of influential business leaders promoting sustainable economic growth in the UK’s northwest.

Based on their findings to date, Dr. Aggidis and his research partners at Lancaster University believe that the entire UK coast could be utilized for electricity production through the application of tidal power technology.

Besides covering the country’s energy needs to a great extent, the development of tidal power projects along the UK coastline would create thousands of new jobs, it is anticipated. Furthermore, barriers to be constructed as part of the system’s structure would also serve as effective protection against flooding, considering the country’s rising sea levels, the feature story noted.

Dr. Aggidis has stood as a sought-after figure in tidal power discussions held in the UK in recent years. His scientific guidance on the topic has been pivotal.

Previous efforts to develop tidal power technology in the UK have been stalled by lack of financing, primarily, as well as environmental concerns.

Dr. Aggidis noted, in the “Business Insight” feature, that the development of tidal power technology required effective policies, which, he added, could play an instrumental role for a future of sustainable energy.