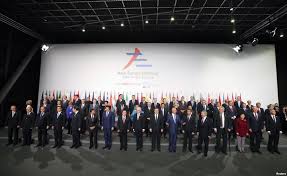 Europe’s energy security and Greece’s pivotal role in the diversification of the continent’s energy supply were addressed by Greek Prime Minister Antonis Samaras during his speech at the two-day Asia-Europe Summit Meeting (ASEM) in Rome.

According to government sources, Samaras stressed that establishing alternative energy sources stands as a crucial part of Europe’s effort to achieve energy security.

The Greek Prime Minister underlined that, as part of this effort, Greece has undertaken a pivotal role through its involvement in the development of the Southern Gas Corridor, to link the Caspian region with Europe’s energy market. The Greek Samaras described this effort as a long-term vision, noting that the country was not only engaged in developing pipeline infrastructure but building bridges of cooperation.

During his speech, the Greek leader also made note of the country’s hydrocarbon exploration initiatives and the imminent international tender for exploration and exploitation of blocks in the Ionian Sea, western Greece, and south of Crete.

Samaras described the association between Europe and Asia as not just being about commerce and economics. He highlighted the enormous cultural heritage of both continents and the importance of increased ties through academic cooperation and tourism.