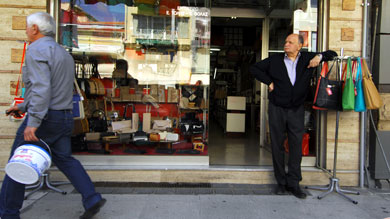 Sales volumes rose for the third month in a row, pointing to a boost in consumer spending in the third quarter, which may help dampen deflationary pressures.

Greece’s international lenders, the European Union and the International Monetary Fund, expect the economy to post a modest recovery in 2014 after six years of deep recession. They expect growth of 0.6 percent, driven by tourism, investment and exports.

Hit by the country’s deep economic slump and record unemployment, retail sales declined by about 40 percent in 2009-2013, driven by austerity policies imposed under the terms of Greece’s 240-billion-euro EU/IMF bailout.