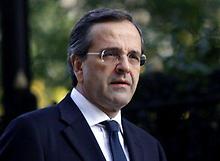 Greece’s government held a cabinet meeting on Wednesday as Prime Minister Antonis Samaras sought to restore calm after a terrible day for the Athens Stock Exchange and Greek bonds.

Although the gathering of ministers had been planned on Monday, it came at an opportune moment. After seeing the stock market fall 6.25 percent and the yield on 10-year bonds rise to as high as 7.85 percent, Samaras used his opening address to ministers as an attempt to counter the apparent panic over Greece’s prospects.

“The government will not allow any deviation from… political stability and from an economic policy driven by adjustment and reforms,” said the premier, according to a statement issued to the media.

“We restored Greece’s trustworthiness with a lot of effort,” he added. “Now that this is bearing fruit, we will not allow anyone or anything to undermine it.”

Samaras also reiterated his belief that Greece would hold general elections in 2016, even though his government faces the prospect of losing the presidential vote in February.

The prime minister suggested that SYRIZA’s stance is to blame for investors’ growing skepticism about Greece.

“We are strengthening the country step by step… and we are avoiding what others want, which is for us to clash with our partners from a position of weakness,” he said. “They [SYRIZA] know that soon it will be too late for them. Greece will keep improving from now on and that scares them, they want to prevent it.”

Deputy Prime Minister Evangelos Venizelos also blamed the markets’ reaction on “doubts about political stability.” He warned that the domestic political sparring between the government and SYRIZA could have an impact on Greece’s fragile position.

“Everyone has to understand that whatever we do here in Greece is immediately magnified, exported and can work in the country’s favor or against it.”