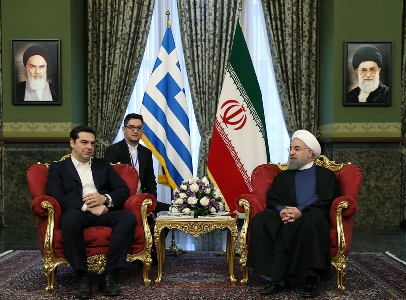 Greek Prime Minister Alexis Tsipras and the first Iranian Vice-President Eshaq Jahangiri on Monday confirmed their governments’ intention to upgrade cooperation between the two countries.Greek Foreign Minister Nikos Kotzias and his Iranian counterpart Mohammad Javad Zarif had earlier signed a series of agreements aiming at upgrading the two countries’ diplomatic relations.These agreements provide for:1. A memorandum for political deliberations2. An agreement on visa exemption for diplomatic passports3. A roadmap for the improvement of bilateral cooperationThe two leaders stressed the importance of combating violence and extremism, dealing with the Islamic state and strengthening cooperation with the view to safeguard the stability in a sensitive area of the world.Jahangiri pointed out that the visit of the Greek prime minister constitutes a milestone for the bilateral relations of the two countries and referred to the decisions taken aiming at strengthening cooperation in the economic sector.Tsipras said that his contact with the first vice president of Iran opens new grounds for cooperation. “We are two peoples who know how to fight for their independence and dignity,” the prime minister said and referred to a strategic upgrading of their bilateral relations. Their common goal, Tsipras noted, is the fact that both countries come out of a long crisis and new possibilities open for the return to growth with mutually beneficial results. The prime minister also referred to the refugee issue saying that the crisis in Syria has an impact on Greece due to refugee flows, adding that we must all contribute so that stability is restored and the Islamic state is dealt with efficiently. To this direction, Iran can play a role, Tsipras added.According to sources, the Iranian vice president stressed the importance of making up for lost time in the two countries’ relations. On his part, Tsipras outlined Iran’s role in the region and stressed his determination on the development of high level bilateral relations. He also spoke of the geopolitical importance of Greece-Iran’s cooperation. The leaders expressed their content over the cooperation in the energy sector, while the Greek Prime Minister said that due to the embargo, bilateral trade fell below 30 million euros in 2015, thus suggesting that there is much room for development and cooperation. He also proposed to organize joint economic committees in order to explore other areas of cooperation and overcome more quickly any obstacles.The two delegations discussed a range of technical issues in order to facilitate cooperation on the financial sector, the field of medicine and health in general, culture and education, infrastructure, transport and the construction industry.