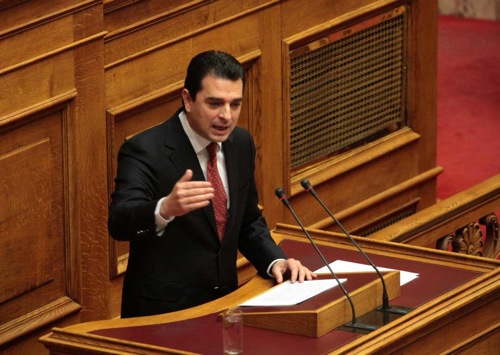 Greek Prime Minister Antonis Samaras named his development minister to the defence ministry portfolio on Friday to replace Dimitris Avramopoulos, who is set to become an EU Commissioner.

Nikos Dendias, 55, who has served as justice and citizen protection minister, will become defence minister at a time when the portfolio is expected to become more high profile.

Athens is backing Cyprus in its efforts to stop Turkey’s gas deposits exploration in areas off the east Mediterranean claimed by the island.

Costas Skrekas [photo], a 41-year-old lawmaker in Samaras’ New Democracy party, will replace Dendias at the development ministry, overlooking issues including private sector debt relief which have been at the heart of talks with the country’s international lenders, the European Union and the International Monetary Fund.

Outgoing minister Avramopoulos, 61, will be the EU’s Home Affairs and Migration commissioner.

A crucial presidential vote which may lead to snap elections is scheduled for early next year. Polls show the main opposition, the anti-bailout Syriza party, leading over the ruling conservatives.