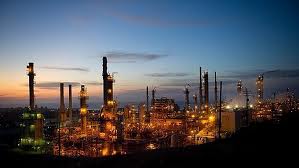 Petroleum product exports, which decreased by 13 percent during the five-month period covering January to May, fell at a slower rate in June, according to Greece’s statistical authority, ELSTAT. The observation was reiterated by an announcement from the Panhellenic Exporters Association, PSE.

In terms of value, petroleum product exports in the first half exceeded four billion euro, slightly under the figure registered for the equivalent period last year. Maintenance work at a major refinery in Elefsina, west of Athens, has been cited as the most likely cause behind this trend. The refinery had stopped operating in March for necessary maintenance work before returning to full capacity.

In recent years, Hellenic Petroleum, or ELPE, has eyed several heavily populated foreign markets with the objective of exporting 40 percent of company petroleum production by 2015. The markets being focused on are Turkey, the Balkan region, North Africa, the Middle East, as well as several European markets, where data has shown that economic growth is robust. ELPE intends to focus its export activity on these markets to make up for decreased sales in Greece.

Petroleum products demand in the markets being considered is forecast to reach 4.16 million metric tons by 2025 from 3.76 metric tons in 2010, mostly as a result of demand for diesel fuel. It has been forecast that Turkey, alone, will need to cover a  diesel fuel shortage of six million metric tons per year. Besides fuels, ELPE is already exporting large quantities of petrochemical products to the neighboring country.