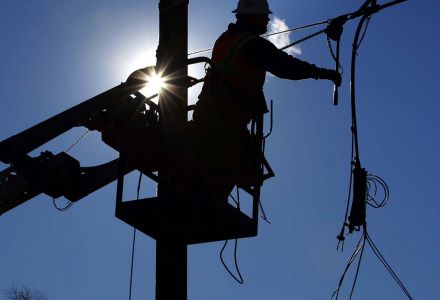 The Greek coalition government plans to respond with tough action against 48-hour strikes, expected to start midnight tonight, by the GENOP-DEI union in reaction to the beginning of parliamentary discussion for prospective legislation concerning the part-privatization of PPC, the Public Power Corporation.

“We will not stay with arms crossed and merely observe the developments, or union groups switching off PPC power plants,” a government official remarked yesterday, responding to GENOP-DEI threats for a showdown with the coalition, as well as power cuts.

Although the government did not provide any details, its intention to take harsh measures has become apparent over recent days, in order to avert any possible power supply problems should production plants and mines in the regions of western Macedonia and Peloponnese be occupied by the union.

Meanwhile, the draft law for PPC’s part-privatization, prepared at the Ministry of Environment, Energy & Climate Change, has undergone numerous changes over recent days. Details of concern include the evaluation of thousands of hectares of land expropriated by PPC from 2001 – the year the corporation was listed on the bourse – and onwards. This land will be included along with production plants and mines in the sale package of “Little DEI”, as the part-privatization is being referred to.

Another draft law issue has to do with whether the company’s prospective buyer will continue to provide the local communities of Florina, in northern Greece, and Arkadia, in central Peloponnese, with a “development tax”, as PPC is doing at present. Also being discussed is the extent to which DEI will continue operating as a “last-resort supplier”.