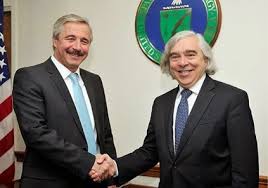 Environment, Energy & Climate Change Minister Yiannis Maniatis held a series of meetings with a range of highly ranked US government officials and energy sector authorities today, on his final day of an official visit to the USA.

The Greek minister’s agenda included talks with US Secretary of Energy Ernest Moniz, Under Secretary of State for Economic Growth, Energy, and the Environment Catherine Novelli, as well as Michelle Patron, an energy policy expert currently serving in the White House as Special Assistant to President Barack Obama and as Senior Director for energy and climate change on the US National Security Staff.

During his meetings, Maniatis presented the current initiatives being taken by Greece in the energy sector. He underlined the importance of developing natural gas transmission projects linked with new gas production areas with the aim of further promoting energy security reinforcement in Europe and, particularly, the eastern Balkans.

The Greek minister also offered detailed presentations of the government’s ongoing hydrocarbon efforts in the Ionian Sea and south of Crete, as well as onshore blocks in western Greece, stressing the importance of these endeavors for the country’s energy interests.

Current geopolitical developments in the eastern Mediterranean were also discussed during the minister’s round of talks, as were Greece’s efforts for peace and stability in the region, and the promotion of regional cooperation.

Maniatis and the US officials agreed on issues concerning European energy security, including diversification of sources and transmission routes, as well as on Greece’s need to develop domestic oil and natural gas deposits.

The Greek Energy Minister and his US counterpart, Moniz, agreed to follow up today’s meeting with another round in the near future.