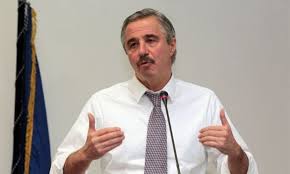 Environment, Energy & Climate Change Minister Yannis Maniatis has forwarded a request to the European Commission seeking the creation of an emergency mechanism that would offer Greece and other EU member states protection in the event of a natural gas supply stoppage from Russia via Ukraine.

The Greek minister’s initiative, delivered to the European Commissioner for Energy, Mr. Günther Hermann Oettinger, as well as the current president of the EU Energy Ministers’ Council, Claudio De Vincenti, proposes a mechanism to be supervised by European energy-sector authorities that would enable a coordinated effort offering lower-priced liquefied natural gas (LNG) to EU members states affected most by a Russian natural gas disruption, from countries possessing surplus amounts.

The Greek minister warned that an extended natural gas disruption by Russia towards the EU was possible, underlining the repercussions for the entire continent.

In such an event, Greece, operating through DEPA, the Public Gas Company, as well as other suppliers, and European counterparts would need to coordinate and seek LNG supply through carriers and other supply methods, possibly for long-term use. Reliance on LNG would essentially be the only viable option if a natural gas crisis broke out.

Coinciding demand for LNG across Europe, however, would trigger a sharp rise in energy costs, a major danger for the economy.

Also, the supply of LNG as an alternative energy option, as opposed to natural gas, stands as a problem for the EU overall, because the Asian region, especially the Far East, led by Japan, is heavily reliant on LNG. The collective LNG need by countries in this part of the world has led LNG prices to levels far higher than those of natural gas in the USA and the EU.

Europe imports between 35% and 40% of its natural gas needs from Russia, through various pipeline routes. In some cases, this reliance is far higher. Bulgaria, for example, is entirely dependent on Russian natural gas. Greece receives 60% of its total natural gas supply via pipelines in Ukraine. Numerous other European markets are supplied through Ukraine, these being Austria, Bosnia and Herzegovina, Bulgaria, the Czech Republic, Hungary, Moldova, Montenegro, Serbia, and Slovenia.