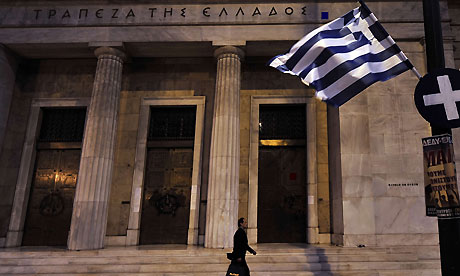 Greek current account balance recorded a deficit of 3.5 billion euros in the January-May period, down 884 million from the same period last year, the Bank of Greece said. The central bank, in a monthly report, said this development reflected an improvement in the balances of primary and secondary income, while the balance of goods and services deteriorated slightly. The balance of goods recorded an 1.2 billion euros improvement in the five-month period, reflecting an improvement in the balance of fuel (as a result of a decline in oil prices). Exports of goods, excluding fuel and vessels, and imports recorded minor changes, with exports of goods -excluding fuel in fixed prices- rising by 1.1 pct in the January-May period. The services surplus shrank by 1.3 billion euros in the five-month period as net transport income fell significantly. Net income from travel services also fell reflecting an 1.3 pct decline tourist arrivals in the country, while income fell 6.2 pct in the same period. Primary income balance recorded a surplus of 1.0 billion euros, up 715 million from the same period last year helped by a decline in net payments on interest, dividends and earnings and salaries. The current account and capital balance recorded a deficit of 42.8 billion euros, down 1.1 billion from the same period in 2015, while the financial transactions balance recorded an increase in foreign direct investments of 545 million euros.