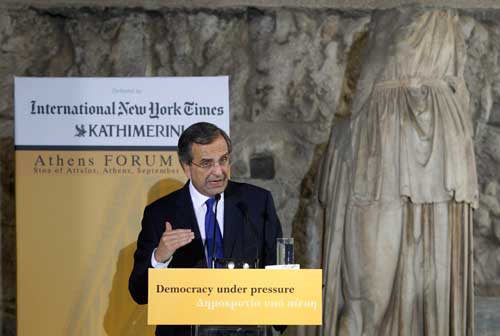 Greece has returned from the brink of collapse, said Prime Minister Antonis Samaras Monday, while lauding the country’s ability to keep going through the damaging effects of the crisis.

“There will be no Weimar scenario for Greece… Greece is back,” Samaras said in a speech at the Democracy Under Pressure forum organized by Kathimerini and the International New York Times.

“Two years ago this country was falling apart …we were the weakest link in Europe,” he said, referring to high debt and deficit levels, the skepticism of European leaders about Greece’s prospects, frequent strikes and capital flight.

“Now the picture is different,” he added, making reference to a series of positive economic indicators suggesting that Greece is back on track, including its achievement of a primary surplus and climbing the global competitiveness index. “We jumped from 147 to 36 in the competitiveness index… and we are going to move further up, to the real top places of world competitiveness.”

Samaras likened Greek democracy to a living organism that has the ability to withstand crises. “It can go through crises but it possesses corrective mechanisms, it has its own antibodies so most of the time it overcomes its problems, it survives, recuperates and grows stronger than before… The problem is when those antibodies fail.”

The prime minister identified populism and extremism as the two main threats to democracy in Greece. He said the government would combat this by “fighting the lies with the truth,” adding that “sweeping reforms” were also necessary as well as “correcting social distortions.”

Speaking two days after SYRIZA leader Alexis Tsipras set out his party’s economic program in Thessaloniki, Samaras seemed to suggest that the leftists are “the enemies of reform.”

“They are launching their last campaign to derail what we have achieved so far,” he said during his speech at the Stoa of Attalos, where he was joined by Athens Mayor Giorgos Kaminis, the executive head of the UN Democracy Fund, Annika Savill, the ex-president of Slovenia, Danilo Turk, and Swedish Foreign Minister Carl Bildt. “The more they fail to present themselves as a credible alternative, the more fraudulent commitments will be spread around.”

Earlier in the day, Deputy Prime Minister Evangelos Venizelos also addressed the forum and highlighted the “crisis of legitimacy” in Europe.

In between the two speeches, the coalition leaders met with Finance Minister Gikas Hardouvelis at the Maximos Mansion, where they discussed the recent meeting between Greek ministers and troika representatives in Paris. Sources said that Hardouvelis warned Samaras and Venizelos to expect a tough time when the troika inspectors arrive in Athens toward the end of the month.

Hardouvelis said that Greece’s lenders want the government to proceed with pension and labor reforms. The coalition, however, has no appetite for such changes due their political sensitive nature.

During the meeting, Samaras also turned down Venizelos’s request for the government to consider changing the electoral law, which gives the first party past the post an extra 50 seats in Parliament.