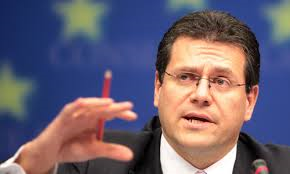 The implementation of the European Union’s third energy package of market legislation stands as a key factor in the effort to integrate the energy market, European Commission Vice President Maros Sefcovic, in charge of Energy Union, and Miguel Arias Canete, the EU Commissioner for Climate Action and Energy, have both stressed.

“Uniform regulations will need to equally apply for all member states if we are to have a single energy market,” Canete noted.

Indicative of its determination to overcome any member-state obstacles in its drive towards an integrated EU energy market, the European Commission has issued warnings to three countries, Greece, Portugal, and Slovenia for inadequate enforcement of an EU directive aiming at energy efficiency.

Although the EU executive body’s warning, in writing, to the three member states does not address top-priority items concerning the energy integration process, it does serve as a firm indicator that no deviations will be tolerated amid the wider energy union plan’s current transition stage.

In the immediate future, Brussels can be expected to make even stricter demands for adherence to the third energy package as the integration plan further develops.

The energy union’s fundamental aspects includes measures to harmonize the institutional frameworks of all EU member states, to reinforce the roles of national regulatory authorities, as well as that of ACER, the European regulary authority.

“Member states will need to not take uncoordinated and isolated measures that affect the unified market,” pointed out Sefcovic, who, besides noting that ACER will gain further authority, stressed that the electricity market would be formally reviewed every two years. Results, he added, will be included in a formal report assessing issues such as pricing policy and market transparency.