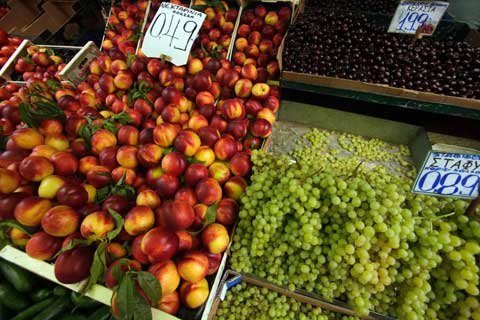 Greece could lose almost 180 million euros if Russia goes ahead with a one-year ban it announced on Thursday on food imports from the European Union but Athens was hopeful that a number of local products would be exempted from the embargo.

“We are making a constant effort to ensure that we only suffer the smallest possible consequences, even none at all, if possible,” said Foreign Minister Evangelos Venizelos.

Kathimerini understands that Russian diplomatic sources have given verbal assurances that many Greek products would be left off the list of imports that Russia will ban when it provides a final list in the days to come.

Sources at the Greek Foreign Ministry believe that Moscow recognizes Greece has attempted to dissuade the EU from taking tough action against Russia as the dispute over Ukraine intensifies. Athens also thinks that its decision to assist Russian tourists stranded after two travel agencies went into bankruptcy was appreciated by Russian authorities.

“I do not want to discuss the process we are involved in,” said Venizelos. “As a European Union country, committed to its community obligations, we try to have the best relations with all countries and protect Greek agricultural production.”

If the embargo goes ahead it will have a significant effect on some areas of Greece, such as the peach-producing areas of Pella and Imathia. Around half of the fruit produced in these areas is exported to Russia.