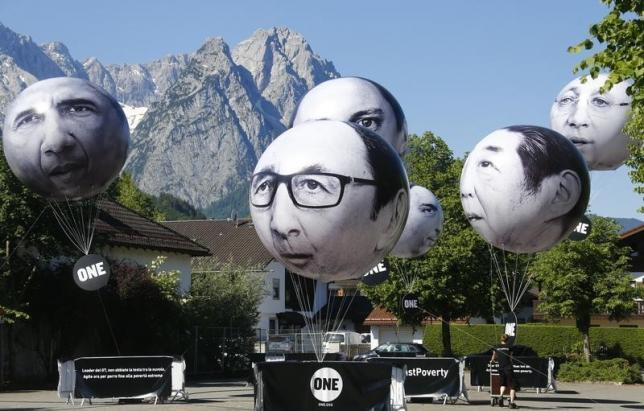 Greece faces a week of urgent diplomacy to free up bailout aid and avert a potential default as world leaders press for a final resolution to the standoff.

With talks between the Greek government and creditors due to resume in Brussels on Monday, Prime Minister Alexis Tsipras faced a united front from Group of Seven leaders calling for movement to end the impasse and avert the risk of wider economic reverberations.

U.S. President Barack Obama put concerns over the deadlock onto the agenda of a G-7 summit hosted by Chancellor Angela Merkel in southern Germany on Sunday. Canadian Prime Minister Stephen Harper “emphasized the importance of addressing the Greek debt crisis,” according to a statement released by his office after a working session on the world economy.

“There was unanimity of opinion in the room that it was important for Greece and their partners to chart a way forward that builds on crucial structural reforms” and returns to growth, White House spokesman Josh Earnest told reporters at a briefing on the president’s 45-minute meeting with Merkel.

The G-7 intervention raises pressure on both sides in the dispute to reach a compromise that unlocks the final 7.2 billion-euro ($8 billion) tranche of aid and brings Greece back from the edge of default, averting a possible exit from the 19- nation euro.

It came ahead of another week of talks in Brussels as representatives of the creditor institutions and the Greek government prepare to reconvene, according to a person familiar with the negotiations who asked not to be named because the deliberations are private. Tsipras is then due to attend a meeting of European Union and Latin American leaders on June 10-11, when Merkel and French President Francois Hollande will also be present.

“All of us were of the opinion that a whole lot of work still lies ahead,” Merkel said in an interview from the summit at Schloss Elmau broadcast on ARD television. “We want to make every possible effort, but we aren’t there yet.”

The Greek government needs to seal an accord or get another extension before the euro area’s bailout of the Mediterranean nation expires June 30. Without a deal Greece risks missing payments on its debt of about 313 billion euros.

“There is obviously a deadline looming,” Earnest said. Obama “is certainly hopeful that Greece and their partners will be able to chart this path without undue volatility.”

The benchmark Athens Stock Exchange plummeted 5 percent on Friday, the most since January. The yield on Greek 10-year bonds added 31 basis points to 11.22 percent, the biggest increase since May 26. The 10-year yield is still down from this year’s high of 13.93 percent and a record 44.21 percent in 2012. The two-year yield rose 198 basis points to 25.22 percent.

The next round of diplomacy comes as Greece and its creditors can’t even agree on which of two proposals is the basis for discussion, prompting European Commission President Jean-Claude Juncker to use uncharacteristically blunt language to signal that he was losing patience with Greece. Juncker, speaking at the G-7, said that Tsipras had misrepresented aspects of the negotiations in Parliament in Athens on Friday.

“I don’t have a personal problem with Alexis Tsipras,” Juncker told reporters at the G-7 summit. “But friendship, in order to maintain it, has to observe some minimal rules.”

In his speech to lawmakers, Tsipras decried the “clearly unrealistic” demands being made of Greece and said he hoped the latest offer from creditors to unlock bailout funds was “a bad negotiating trick.”

A Greek plan, submitted about the same time, is still on the table and waiting for feedback, a Greek government official said by e-mail on Saturday, asking not to be identified in line with policy.

Underscoring the pressure on Greece to commit to reforms undertaken elsewhere, Italian Prime Minister Matteo Renzi said it was “unthinkable” that Italians should help pay for a Greek pensions system more generous than their own.

“In other words, the Tsipras government also needs to pass the reforms: reform of the pension system, reforms to stop tax evasion, reform of the tax system,” Renzi told reporters at Schloss Elmau. “There is full agreement at the G-7 that everything must be done in order to avoid Greece exiting the euro, but also that Greek citizens, actually the Greek government, must be the first to send a signal.”

The final day of the G-7 summit takes place on Monday. The group comprises the U.S., Canada, Germany, France, Japan, Italy and the U.K.