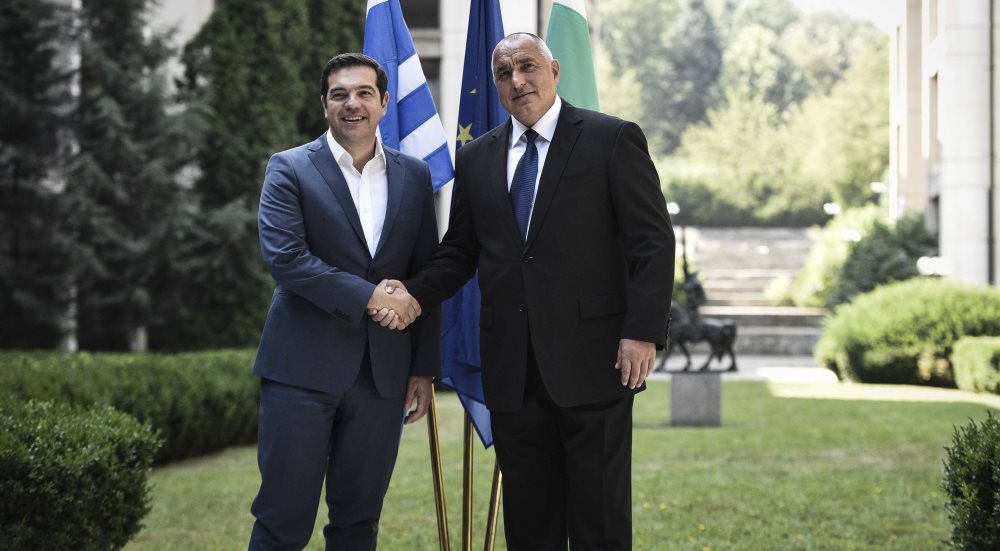 The Greek-Bulgarian High-Level Cooperation Council held on here on Monday will allow Greece and Bulgaria, two highly important countries of the Balkan peninsula, to make a significant new start toward establishing very close and constructive relations, Greece’s Prime Minister Alexis Tsipras said on Monday, in joint statements with his Bulgarian counterpart Boyko Borisov after the Council ended.
Tsipras and Borisov pointed to the role of the two countries as pillars of stability within the surrounding region, at a time of generalised destabilisation in their neighbourhood, and noted their agreement for deeper cooperation within the EU and NATO in order to strengthen this role and to ensure security, stability, peace and growth in the region.
“Looking at recent developments in our neighbourhood, one sees that the need for cooperation is more urgent than ever,” the Greek prime minister commented. He noted that there were major challenges to face as three parallel crises unfolded – the economic, refugee and security in Europe crises – and noted that Greece and Bulgaria fortunately remained outside the last of these as pillars of security and stability.
“Our cooperation will help so that we stay out of this crisis,” he added. Developments in Turkey and the need to progress faster toward a “better, social and democratic Europe” demanded the closest possible cooperation between the two countries, he said.
The Greek and Bulgarian people had the wisdom to overcome any past differences and forge a relationship that was very constructive and mutually beneficial for both sides and for the region, Tsipras noted. Greece and Bulgaria could be a model for a constructive cooperative relationship to promote peace and stability in the region, between two countries in the EU and NATO, he added.
“We can do a lot together within the EU and NATO with a flexible policy benefiting both states,” Borisov said, noting that relations between the two countries and their governments were marked by “personal relations and understanding” and that both sides had supported the other in times of crisis. Even though the two governments were from different political “families,” he added, they agreed on issues of critical importance.
Tsipras gave his Bulgarian counterpart an open invitation to visit Athens, Thessaloniki and Alexandroupolis to examine the progress of their initiatives and said there would be “open communication” between them.
Both prime ministers focused on the importance of energy cooperation between the two countries, with Tsipras noting it would play a pivotal role in their relations. He noted that the construction of the Interconnector Greece Bulgaria (IGB) pipeline as a section of the vertical corridor was a priority project that would boost the position of both countries on the region’s energy map and bring multiple benefits.
Following the Council meeting, the government delegations from the two sides signed a series of bilateral agreements, including a Joint Declaration of the 3rd Greek-Bulgarian High-Level Cooperation Council meeting, a Joint Declaration on energy cooperation, an Executive Programme for Educational and Cultural Cooperation in 2016-2018, and a Joint Action Programme for Tourism in 2016-2018.
According to sources, emphasis was also given to infrastructure and dam management, with Infrastructure, Transport and Networks Minister Christos Spirtzis and his Bulgarian counterpart called in during the Tsipras-Borisov meeting to discuss these issues in more detail, including plans to extend the Burgas-Alexandroupolis rail line. The Greek side emphasised the issue of water management on the Evros River through dams on the Bulgarian side to avoid flooding in winter months, while the Bulgarian side was open to suggestions for finding a solution.

In his address to the Greek-Bulgarian High-Level Cooperation Council meeting held before the joint statements with Borisov, Tsipras had stressed that Greece’s northeastern neighbour was a “strategic ally” in Athens’ view.
“We consider Greece and Bulgaria can be an axis of stability in a difficult region, in a broader destabilised region, and at the same time also drag broader forces within the Balkans and the EU toward a prospect of stability and creative cooperation,” Tsipras said.
Referring to his earlier private meeting with Borisov, the Greek prime minister said they had an opportunity to discuss crucial issues for the region in the wake of worrying developments in Turkey. These included the refugee crisis and the need for Greece and Bulgaria to play a constructive role within the EU in order to preserve the EU-Turkey agreement and keep refugee flows low, while continuing to put pressure on EU countries to continue relocation programmes.
They also noted a need for constructive projects in the areas of the economy, energy, transport, trade and tourism, especially the rail link between the ports of Burgas and Alexandroupolis, and the links through the TransAdriatic Pipeline (TAP) and IGB pipeline, the LNG station in Alexandroupolis, trade in agricultural goods and an increase in tourist flows, with an estimated one million tourists from Bulgaria expected in Greece this year and a matching increase in Greeks visiting Bulgaria.
According to sources, Borisov said that the Greek premier’s visit was very positive and referred to the possibility for steady cooperation between Greece and Bulgaria, along the lines of France and Germany. He stressed the importance of preserving friendship and understanding in a destabilised region, adding, “We must generate more peace and more friendship in the Balkans.