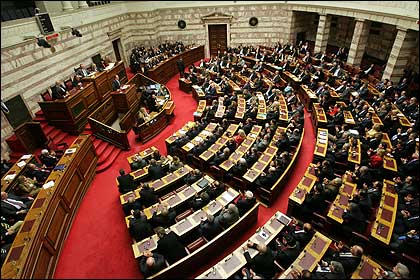 The draft bill legislating for the prior actions that must be passed by October 15 will not necessarily be tabled as a single article, government spokeswoman Olga Gerovasili said in statements to the radio station ‘Real FM’ on Thursday.

She also highlighted the issue of debt relief, saying it was a major national issue “and the greater part of a solution” that will allow the three-year agreement to pass as painlessly as possible.

Gerovasili said that the prime minister, in his address in Parliament on Wednesday night, had publicly extended the first invitation to the opposition parties to reach an understanding on debt but none of them had shown any signs of revising their position. She questioned whether it was possible for a political formation that considers the debt sustainable to cooperate with a party that asserts it is not.
The spokeswoman did not spare her criticism for those she called “late opponents of the memorandums,” saying this amounted to “exceptional hypocrisy” from the people who were responsible for placing the country in this position to begin with and who had agreed to much harsher measures, if not actually pressed the creditors to not back down from their demands in the belief that the “Leftist interlude” would have ended by the summer.
“It would be good, therefore, to finally have a fertile dialogue with the opposition, something that we did not see emerging yesterday,” she added.
Tweet