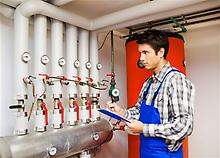 The price level of natural gas stands to fall by as much as 15 percent as of the new year before falling further, by about 20 percent, next April, compared to October, 2014, assuming crude oil prices remained at a level of between 70 and 75 dollars a barrel, the head of Prometheus Gas, Kostis Sifneos, forecast yesterday.

The chief official of Prometheus Gas, a 50-50 Greek-Russian venture operated by the Copelouzos Group and Gazprom Export, offered his prediction during a speech at an industry event staged at the International Hellenic University in Thessaloniki.

The anticipated fall in natural gas prices, which, in Greece, are linked to oil prices and revised every three months, can be expected to prompt an increase in household gas consumption in the first few months of 2015, according to Sifneos.

The country’s gas market, Sifneos remarked, has contracted by approximately 40 percent over the past few years as a result of a combination of factors, including the Greek recession, reduced industrial output, and cuts to cross subsidization, a practice that entails charging higher prices to one group of consumers in order to subsidize lower prices for another group.

Sifneos noted that Prometheus Gas plans to play a leading role in Greece’s liberalized natural gas retail market, as long as the market is truly liberalized.

The Prometheus Gas head said Russia has provided crucial support for Greece, even during difficult periods. “Russia has supported Greece during all difficult periods, even when, one year ago, Turkish company BOTAS, violating an agreement with DEPA (Greece’s Public Gas Corporation), decided to withhold gas quantities intended for Greece in order to cover its own domestic needs, creating a significant supply shortage,” Sifneos commented. “The country’s energy supply concerns need to be secured by reliable partners,” he continued.

Also speaking at the event, Michalis Thomadakis, a former deputy president of RAE, the Regulatory Authority for Energy, who is now a board member, said it would take years for Greece’s gas market to rebound to pre-recession levels.