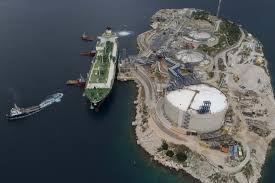 Gas imports for both large and small-scale consumers increased by 17 percent in the year’s first four-month period, defying unprecedented market conditions brought about by the pandemic, especially during March and April, the peak of the lockdown.

Gas imports totaled 21,393 GWh between January and April this year compared to 18,211 GWh during the equivalent period a year earlier, according to data provided by DESFA, the gas grid operator.

During the four-month period, gas imports at DESFA’s LNG terminal on the islet Revythoussa just off Athens rose to 11,679 GWh, a 45 percent increase compared to a year earlier. This terminal was the national gas grid’s biggest entry point.

Sidirokastro, at the Greek-Bulgarian border, followed with a pipeline-gas quantity of 7,952 GWh, an 8 percent drop compared to the equivalent four-month period a year earlier. Even so, Sidirokastro remains an important entry point.

This trend highlights the fact that major Greek energy market players have been able to secure competitively priced LNG and favorable delivery solutions.