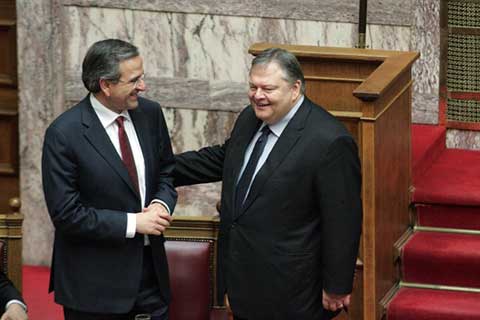 It is 40 years since the restoration of democracy, and the two main parties which were established in 1974 and determined the country’s fate since then are unable to act their age. For decades, their policies have concentrated on hurling accusations at each other, even though their behavior in government was almost identical: Their main concern was to achieve the broadest possible support by providing voters with benefits. Although New Democracy and PASOK were forced to join forces so as to have a governing majority, the slightest issue gets them trading accusations and insults again.

Those of us who hoped forced cohabitation would establish a mentality of consensus and cooperation in ND and PASOK have no choice but to keep hoping. Clearly, they are unable to ditch the habits of the good old days, when they alternated in power and the only policy the opposition needed was to oppose whatever the government did. This created a mentality where others were always in the wrong and we were in the right. From our political leaders and union heads to our neighborhood coffee shop orators, we learned that dialogue means parallel monologues aimed solely at the defeat of our rivals.

We learned to accept no compromise and could not understand how others could not see things the way we did. When New Democracy accused PASOK of cooking national statistics in order to get Greece into the eurozone in 2001, we were amazed that our EU partners put the blame on Greece and not on PASOK. Similarly, in 2009, with the crisis at the gates, PASOK refused to cooperate when the ND government proposed austerity measures and reforms. Later, it accused ND of cheating Brussels with its statistics. There was no hiding the truth, but once again, one party thought it would score points by hurling accusations at another, as if that were the important issue.

Our parties believe that by showing each other up they gain the gratitude of their audience and tolerance for their own actions. In the same way, citizens grew accustomed to seeing only the bad of the “other side” and the good of their own. Without a sense of reality, there can be no framework for political cooperation. We cooperate only when conditions demand it, without knowing the mechanisms of coexistence and synthesis. ND and PASOK cooperated when they had to; in the same way, for the sake of political stability, Prime Minister Antonis Samaras and Deputy PM Evangelos Venizelos yesterday decided to show a united front, after two days of verbal skirmishes between their parties.

Most of our parties show the same arrogance and inability to cooperate. Even as the results of the recent European Parliament elections raised the specter of no party winning a viable majority in the next national elections, they all act as if the only policy they need is to attack their rivals. They do not seek solutions to the country’s problems with ideas, seriousness and consistency.