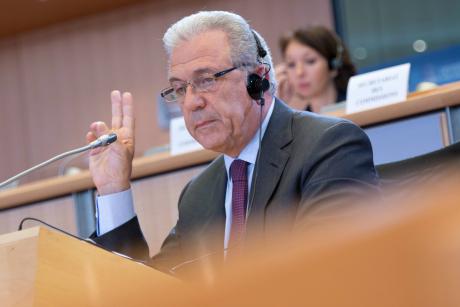 The European Union should not turn into a fortress to deal with immigration but should do more to stop migrant smugglers in their tracks, the new EU commissioner for migration, home affairs and citizenship, Dimitris Avramopoulos, told Kathimerini in his first interview since taking up the job at the beginning of the month.

“The so-called Fortress Europe is not an option,” said Avramopoulos, who left his post at the Defense Ministry to go to Brussels. “It is a danger for the rights of European citizens.”

The new commissioner indicated that the three areas he will be focusing on are doing more to stop migrant smuggling, providing more assistance to the EU countries that are migrants’ first port of call and developing a more comprehensive immigration policy for the Union.

“What we must do above all is make inactive all those who invest in illegal immigration,” he said. “We can only do that if we create and implement for the first time a complete immigration policy that pushes those looking for security and progress in Europe toward legal migration.”

Avramopoulos also suggested that countries like Greece which are key gateways for irregular migrants looking to reach the EU’s most prosperous countries could expect to receive more assistance under his commissionership.

“The realization by all that Europe’s borders are common and that a show of greater solidarity toward the countries that feel the biggest pressure is the only realistic choice we have in Europe,” said the 61-year-old politician.