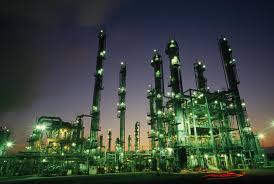 Foreign market analysts are offering upbeat predictions on the financial trajectories of Greek refineries, despite the falling price of crude oil, which has slid to 96 dollars a barrel.

Deutsche Bank led the way several days ago, on August 12, with a positive report that offered a target value of 7.2 euro for Hellenic Petroleum, or ELPE, which is 31% higher than the share’s current value. ELPE shares ended Monday’s trading session at 5.28 euro, down by 4.52%.

A Bank of America Merrill Lynch report on Motor Oil, released Monday, offered a target value of 8.40 euro for the Greek petroleum firm’s share price. It ended trading on Monday 1.55% higher, at 7.84 euro.

One reason behind the optimistic forecasts being delivered by foreign analysts for Greek refineries is the sector’s improved refinery margins. Bank of America Merrill Lynch expects Motor Oil’s refinery margin to be even better than that of ELPE. Motor Oil’s next EBITDA figure, according to the market analyst, would reach 54 million euro, a 39% increase.

Another factor behind the upbeat reports on Greek refineries is the overall expectation of improved refinery margins for firms operating in the Mediterranean region, despite major challenges being faced by the sector in Europe, as noted by Deutsche Bank.

Also, Greece’s retail petroleum market is showing signs of gradually recovery, convincing foreign analysts to believe that both ELPE and Motor Oil will benefit from an improving Greek economy.

Moreover, Bank of America also forecast that Greece’s retail petroleum market stood to gain from the heightened market activity generated by seasonal tourism, despite the fact that, on a domestic level, demand has remained unchanged.

The positive reports delivered by the foreign analysts also took into account the involvement of Greek petroleum firms in prospective local oil exploration activity. But the extent of the impact on Greek refineries remained an unknown quantity, the analysts noted.