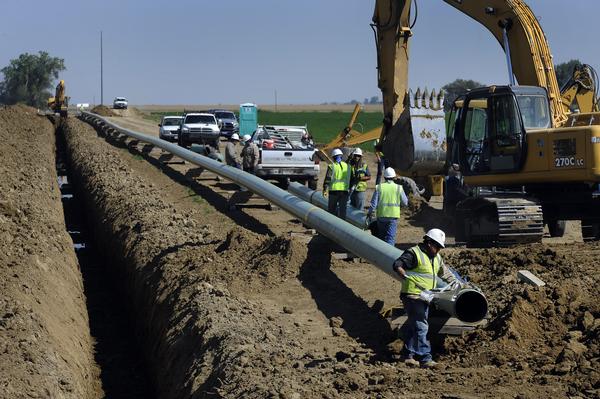 The first deliveries of steel line pipes and bends, to be used in the construction of the Trans Adriatic Pipeline (TAP) section traversing Greece, have started arriving at the ports of Thessaloniki and Kavala, in the country’s north, the TAP consortium has announced.

A ceremony marking the beginning of construction for the project was held last week in Thessaloniki under the auspices of Greece’s Prime Minister Alexis Tsipras. The event was also attended by top-level representatives of countries participating in the implementation of the Southern Gas Corridor; the European Union; the US, Bulgaria and Switzerland.

The first vessels and trains to arrive carried approximately 1,500 line pipes and 200 bends. These will be stored at the Main Marshalling Yards of Thessaloniki, at the Thessaloniki Port Authority, and at Kavala, at its “Philip II” port. All pipes will subsequently be transferred along the routing of the pipeline.

“The delivery of line pipes and bends to the ports of Thessaloniki and Kavala marks the commencement of the construction period for the Greek section of the pipeline. This is the most significant stage of the biggest energy infrastructure project to be currently implemented in Greece, which – thanks to the excellent cooperation of all stakeholders – is advancing as planned and will be ready to receive gas in 2020,” noted Rikard Scoufias, TAP’s Country Manager for Greece. “The deliveries of materials by the contractors are executed in accordance with TAP’s high health and safety standards,” he added.

Approximately 32,000 line pipes will be used for the construction of the pipeline section crossing in Greece. Line pipes are produced by the Greek company Corinth Pipeworks SA (495 km) and the German company Salzgitter Mannesmann International GmbH (270 km). Salzgitter is also manufacturing the hot formed bends.

A total of 323,000 tonnes of steel pipes, the equivalent of 44 Eiffel towers, will be used for the 550 km of pipeline to be constructed in Greece.

TAP will transport natural gas from the giant Shah Deniz II field in Azerbaijan to Europe. The 878 km long pipeline will connect with the Trans Anatolian Pipeline (TANAP) at the Turkish-Greek border at Kipoi, cross Greece and Albania and the Adriatic Sea, before reaching southern Italy.

TAP will promote economic development and job creation along the pipeline route and will be a major source of foreign direct investment. With first gas sales to Georgia and Turkey targeted for late 2018, first deliveries to Europe will follow approximately one year later in early 2020.