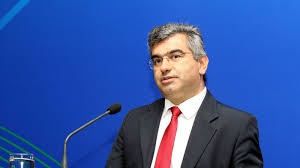 Konstantinos Mathioudakis, who has served as General Secretary at the Environment, Energy & Climate Change Ministry since 2009, will be a candidate for the Executive Director’s position at the International Energy Agency.

The IEA, an independent organization which works to ensure reliable, affordable and clean energy for its 29 members and beyond, focuses its efforts on energy security, economic development, and environmental awareness. It was founded in response to the oil crisis in 1973-74 as a means of helping countries coordinate a collective response to major distruptions in oil supply.

Mathioudakis’s candidacy for the position, whose role has broad political, analytical, and operational responsibilities, will be backed by the Greek government. Successful lobbying will be required if the Greek official is to be recruited for the IEA’s top post as a number of other member states will also be promoting candidates of their own for the job.

If successful, Mathioudakis will succeed Dutch official Maria van der Hoeven, who has led the IEA since 2011.

Mathioudakis is a professor at the National Technical University’s (NTUA) Faculty of Mechanical Engineering. He holds a post-graduate degree gained at Belgium’s Von Karman Institute for Fluid Dynamics in 1981, as well as a Phd from the country’s Catholic University of Leuven, four years later.