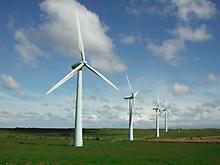 The Environment, Energy & Climate Change Minister, Mr. Yannis Maniatis, has approved a plan for the construction and operation of a 39.1-MW wind-energy park in Kozani, northern Greece.

According to a ministry announcement, the project’s development will contribute approximately 47 million euro to the real economy, while, once the wind-energy park begins operating, it will produce roughly 95 GWh of environmentally-friendly electricity on annual basis.

The announcement also noted that, as part of the ministry’s wider plan for sustainable and decentralized growth, Mr. Maniatis had, in recent months, given the green light to a total of 24 major wind-energy parks, located both in mainland Greece and on the islands. Their total output has been estimated at 926.8 MW, while the projects are expected to offer approximately 1.1 billion euro to the real economy, the announcement added.