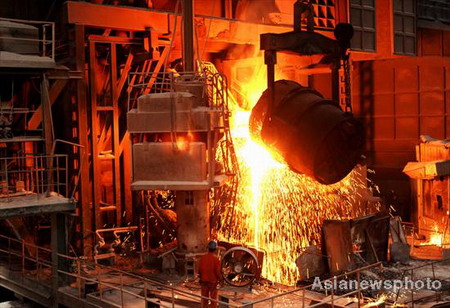 A committee assembled by the Production Reconstruction, Environment and Energy Ministry about two months ago to examine energy-cost reducing measures and swiftly deliver proposals by the end of April has yet to produce any results.

A “power disruption management” plan initiated by the country’s previous administration, which would enable energy cost savings for major-scale industry in exchange for shifting energy usage to off-peak hours whenever required by IPTO, the power grid operator, is a key topic on the committee’s agenda.

The country’s steel industry, struggling amid high energy costs and the long-running recession, has desperately held on for some favorable news that could offer some hope for survival. Making matters even worse for the steel industry, public-sector investments and construction projects have frozen amid the country’s overall uncertainty caused by the prolonged bailout negotiations with creditor representatives.

Halyvourgiki, Greece’s oldest company in the steel industry, devasated by the deep and ongoing recession, hardly operated in 2013 and 2014, essentially subsidizing workers to keep them on the payroll. The company has announced a voluntary retrenchment program for employees. According to sources, the company’s retrenchment plan offers an average of 15 months salary for every worker.

In recent years, Halyvourgiki has made investments worth 250 million euros, without any subsidized support, but, instead, regular reinvestment of company profit generated by its business activities.