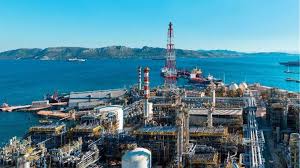 Strategic decisions made by Hellenic Petroleum (ELPE) back in 2006 for an upgrade of the enterprise’s refinery in Elefsina, west of Athens, enabling production of the entire range of fuels, including new-era marine fuel, has provided flexibility for robust financial results.

Most refineries in the wider Mediterranean region are currently pressured by significantly narrowed profit margins. ELPE is an exception. Its ability to produce new low-suphur marine fuels has secured a strategic advantage over competitors.

Further investments currently being made in the company’s refinery division are expected to boost profit figures from levels of 700 to 800 million euros to one billion euros.

As part of its transformation for the future, ELPE is also striving for swifter growth in the renewable energy market. It aims to reach an operating RES capacity of 600 MW over the next two years. ELPE intends to participate in the next RES auction with facilities measuring 460 MW.

In the gas market, ELPE is closely following the forthcoming privatization of gas utility DEPA. The petroleum group, holding a 35 percent stake in DEPA, will either seek to acquire a full stake or sell its minority stake. The company wants a clear-cut solution.

In electricity, a final investment decision on the development of a new gas-fueled power station is expected by summer. This decision will greatly depend on the progress of the target model, as well as the government’s commitment to its decarbonization policy.

As for its hydrocarbon interests, ELPE plans to stage a first drilling operation at the Gulf of Patras block by the end of 2020. Seismic surveys at other blocks in its hydrocarbon porfolio are currently being conducted.