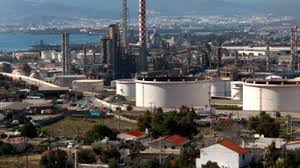 Spurred by record production and export levels, ELPE, Hellenic Petroleum, has reported its strongest ever group operating profit in the fourth quarter of 2014.

According to a company announcement, the group’s EBITDA figure for 2014 reached 417 million euro, up considerably from 178 million euro posted in 2013.

All the corporate group’s divisions registered improved financial performaces, while some produced record contributions. The group’s refining division benefited from the favorable international market conditions in the refining sector during the second half of 2014, as well as from more efficient performance levels at the group’s refineries following upgrades at its refining facilities in Elefsina, west of Athens, in early 2014. More discliplined cost control and an increase in exports, which rose to constitute 50 percent of total turnover, also contributed to the performance.

The group’s trading division also increased its performance. Restructuring efforts over the past two years led to a four-year high in operating profit, while the company’s subsidiary firms abroad registered their best ever performances, despite unfavorable local conditions. The petrochemicals division also rose to achieve record profitability.

Earlier this month, ELPE submitted offers for exploration and exploitation of two onshore blocks in Arta-Preveza and northwest Peloponnese as part of a tender organized by the Production Reconstruction, Environment and Energy Ministry. Results have yet to be determined. Furthermore, the company has also begun exploration work at an offshore block in the Gulf of Patras, as part of a consortium including Italy’s Edison and Irish company Petroceltic.

Fuel demand in Greece registered a 1.5 percent year-on-year increase in 2014, reaching 6.7 million tons, according to official data, the first rise reported since 2009. Diesel consumption increased to offset a drop in demand for petrol. Sixty percent of new vehicle registrations concerned diesel-powered models. Reduced fuel prices, as well as a lower special consumption tax (EFK), led to a five percent increase in the demand for heating fuel.