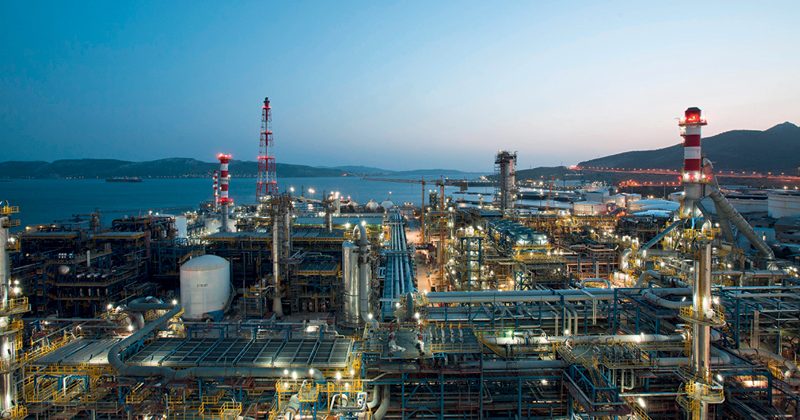 ELPE (Hellenic Petroleum) has posted an adjusted EBITDA figure of €834m (+14%) for 2017, the highest on record, with group refineries improving utilization and operations and achieving a record overperformance vs benchmark margins.

The ELPE group, which released its fourth quarter and full-year 2017 results today, took advantage of the opportunities in the Med crude oil pricing structure, thus benefiting from significant savings in feedstock costs. Average benchmark refining margins remained at high levels, with the Group system margin increasing by $0.5/bbl, while the USD was slightly lower vs the euro.

The significant reduction of the group’s financing costs by 18%, and the increased profitability of the affiliated companies, mainly due to DESFA’s (natural gas grid operator) performance, resulted to even larger improvement at the Adjusted Net Income level, which amounted to €372m (+40%).

Marketing and Petrochemicals divisions maintained their contribution at high levels, recording sales growth and improved performance. Adjusted EBITDA for Marketing was at €107m, with Petrochemicals at €95m for FY17.

In terms of FY17 reported results, according to IFRS, the recovery of crude oil prices had a positive impact on inventory valuation, leading the IFRS Reported Net Income at €384m (+17%), as well as on Net Sales, which combined with sales volumes increase, amounted to €8bln (+20%), net of taxes.

With regards to 4Q17 results, the decline in benchmark margins and the appreciation of euro against the dollar, led Adjusted EBITDA to €170m (-21%) and Adjusted Net Income to €59m (-28%). Financing costs during the quarter recorded a further reduction for the 5th consecutive quarter, and at €37 million are down 28% vs 4Q16.

The recovery in crude oil prices continued in the fourth quarter, as OPEC announced the extension of the agreement for the control of crude oil production and exports. In 4Q17, Brent crude oil averaged $62/bbl, the highest level in the last two years, while in FY17 Brent was $10/bbl higher vs 2016, at $55/bbl.

Euro strengthened against US dollar in 4Q17, with the exchange EUR/USD rate averaging 1.18, while FY17 stood at 1.13.

In 2017, Net Finance costs amounted to €165m, the lowest levels in the last 5 years, following the refinancing of bonds and bank loans, and the reduction of Gross Debt by €600m over the last two years. Furthermore, the refinancing of loans maturing in 2018 is in progress, with a significant positive impact on the average cost and duration of debt, as well as improved risk management.

In Exploration and Production, the planned exploration at the offshore Gulf of Patras license is progressing. Furthermore, the ratification of the Lease Agreements, for the onshore areas of Arta – Preveza and NW Peloponnese, as well as for offshore Block 2 by the Greek Parliament, is expected in the next few days, with the initial exploration works being scheduled to begin immediately after.

Regarding the participation in DESFA, the process for the sale of 66%, accounting for 35% of the Group’s participation and 31% of the Greek State, is in progress. The two international JVs that qualified to participate in the final phase of the process submitted binding offers on 16 February 2018, with ELPE and TAIPED (state privatization fund) currently evaluating the offers. In 2017, the participation of the DEPA Group in the consolidated financial results of Hellenic Petroleum amounted to €46m, with DESFA having a significant contribution.

Key highlights and contribution for each of the main business units in 4Q/FY17 were:

Crude mix optimisation and improved operating performance led to a significant over-performance vs benchmark margins, offsetting the impact of the unplanned shut-down of the hydrogen unit at Elefsina refinery.

A small decline in polypropylene sales and stronger euro led to a decrease in the operating profitability, with 4Q17 Adjusted EBITDA at €20m (-20%).

Domestic Marketing volumes were higher by 3% to 1m MT for another quarter, with 4Q17 Adjusted EBITDA at €9m (-1%).

DEPA Group participation to consolidated Net Income came in at -€1m, due to the increased provisions and lower sales volume.

Elpedison EBITDA amounted to €14m (+19%), despite the delay in resuming the gas-fired generation flexibility remuneration mechanism.