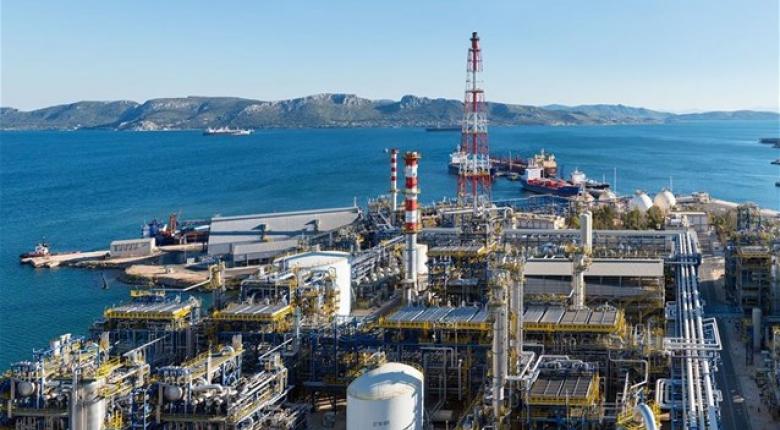 ELPE (Hellenic Petroleum) has announced financial results, according to IFRS, with 1Q18 Adjusted EBITDA at €149m and Adjusted Net Income at €62m, recording a decrease vs 1Q17.

Weaker benchmark margins and USD vs the Euro were the key drivers for the results. In this environment, the group’s refineries achieved record high utilisation, resulting in increased production and sales to 3.9m MT (+2%) and 4.1m (+3%) respectively, as well as record high exports at 2.5m MT, exceeding 60% of total sales. The strong operating performance of the refineries and crude mix optimisation kept performance vs benchmarks and the overall ELPE realised margin at high levels.

Geopolitical developments and the implementation of OPEC’s decision to reduce crude oil production led oil prices at the highest level since 4Q14, with Brent averaging $67/bbl in 1Q18, increased significantly (+22%) vs 1Q17 ($55/bbl).

Macro developments and monetary policy in Eurozone and the US resulted in the further strengthening of the EUR, with EUR/USD averaging at 1.23, +16% yoy.

Auto-fuels demand recorded an overall increase of 4%, while the reduction in HGO consumption due to mild weather conditions led to a decline in total domestic fuels demand of 6% for the first quarter of 2018, with total consumption at 1.7m MT. Bunkering and Aviation demand also fell by 5%.

The refinancing of the Group’s loans, totaling circa €900m, will be completed in 1H18. More precisely, the refinancing of a €400m syndicated loan facility, maturing in 2023, has been agreed with the participation of both Greek and foreign banks, while a revolving credit facility of €300m, maturing in 2021, was signed. The interest rates have been reduced significantly, with upsizing on loan amounts committed on both facilities. In addition, a three-year $250m revolving credit facility has been signed, improving balance sheet FX risk management, while an existing syndicated loan facility of €240m, which was arranged in 2016 for Eurobond refinancing, has been fully repaid. As a result, the Group notably improved its debt profile and sourcing, with a significant part of its funding covered by committed medium-term loans. This, combined with a reduction in total borrowing, which as at 31 March 2018 came in at €2.7bln, led finance expenses in 1Q18 to €39m, 17% lower yoy.

Net debt at €2bln, with debt gearing at 45%, on similar levels vs last year.

In E&P, ELPE is continuing its efforts to create a diversified portfolio through alternative partnership structures in Greece. In this context, as part of a JV, it submitted an offer for exploration and production in two offshore areas west and southwest of Crete (Total 40% – operator, ExxonMobil 40%, ELPE 20%) and one in the Ionian Sea (Repsol 50% – operator, ELPE 50%)

Regarding the sales process for 66% of DESFA, which accounts for 35% of the Group’s participation and 31% of the Greek State, the sellers accepted an offer of €535m from a JV of European companies Snam SpA, Enagas and Fluxys, while an EGM of ELPE, held on 7 May 2018, approved the transaction, which is currently subject to TAIPED, as well as competent regulatory authorities’ approval processes in Greece and the EU.

DEPA, as part of its restructuring plan, announced on 16 May 2017, the sale of 51% of the retail gas company EPA Thessaloniki to ENI for a cash consideration of €57m.

Key highlights and contribution for each of the main business units in 1Q18 were:

The Group’s refinery production was 3.9m MT, with sales exceeding 4m MT, and exports recording a 15% increase vs last year, to a historical high of 2.5m MT, accounting for 62% of total sales.

Crude mix optimization and availability of all refining units sustained realized margin at high levels, offsetting part of the reduction in trading contribution due to the higher exports.

1Q18 Adjusted EBITDA at €26m, with sales volumes and operating profitability at similar with 1Q17 levels.

International Marketing sustained its profitability, with Adjusted EBITDA at €11m (+6%), on improved profitability in the Serbian and Bulgarian markets despite the decline in wholesale sales volumes.

DEPA Group contribution to consolidated Net Income came in at €17m, due to a drop in gas demand from power generators as well as domestic and commercial customers due to milder weather conditions than last year.

Similarly, Elpedison’s EBITDA at €5m in 1Q18, due to the reduced demand, while the final approval and activation of the flexible compensation mechanism for independent power generators is still pending.