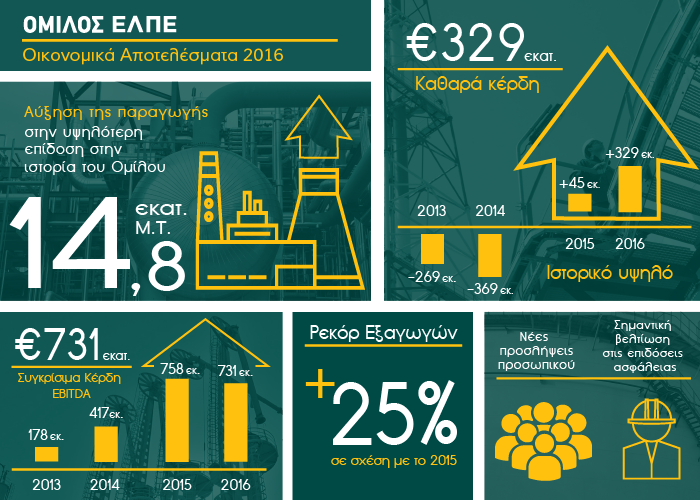 The Hellenic Petroleum corporate group (ELPE) achieved significantly higher profitability in 2016 for the second consecutive year following losses in 2013 and 2014, despite a 25% drop in benchmark refining margins, it announced today.

Strong operating cash flows and the improved position of the Group in financial markets, following successful negotiation and harmonisation in financial ratios and debt covenants in eurobonds and bank facilities, enabled the decrease of gross debt by €389m, which came in at €2,842m in FY16, with obvious benefits for the Group, reaffirmed by the successful issue of the new 5-year, €375m Eurobond, with a 4.875% coupon.

Furthermore, improved liquidity, combined with the agreements for direct supply from national oil companies of Russia, Iran, Iraq, Saudi Arabia and Egypt, enabled the realization of opportunities in the Med crude pricing, with significant benefits for the Group in its financial performance, operations and security of supply.

Domestic Fuels Marketing total sales increased by 7.8%, at 3.538k MT; market share was also higher in all products ranging between 0.3% and 8.1%, with total increase of 2.4%. The development of the company’s controlled network was also significant in 2016, with both EKO and BP penetrating the market, with high value consumer proposition in products and services.

In the context of an international tender process, Hellenic Petroleum was announced as preferred bidder for the award of hydrocarbons exploration and exploitation rights in offshore “block 10” in the Kyparissiakos Gulf area.

As for the sale process concerning 66% of DESFA share capital to SOCAR, this plan did not materialise to a transaction. The Group, in cooperation with the HRADF will assess their next steps.

Furthermore, following a tender process conducted by RAE, the Regulatory Authority for Energy, in December 2016 for the construction of PV projects with a total capacity of 40 MW, the Group submitted successful offers for all its 3 projects, with total installed capacity of 8,6 MW. The Group will proceed with the development of these projects in the next few months.

On the basis of the positive 2016 results and the improved financial position of the Group, the ELPE board decided to propose a distribution of €0,20/share.

OPEC’s decision to reduce crude oil production and exports led to the recovery of international crude oil prices, with Brent averaging $51/bbl, the highest since 3Q15.

A heavier refinery maintenance schedule in the fourth quarter affected products’ supply-demand balances, leading to the recovery of key product cracks q-o-q, supporting Med benchmark refining margins, with FCC averaging $5.4/bbl, vs $4,7/bbl in 4Q15 and Hydrocracking at $5.5/bbl vs $6.6/bbl last year. On a FY16 basis the two key benchmark margins came in at $5.0/bbl, $1.5/bbl lower (-25%) vs 2015.

Adjusted EBITDA amounted to €215m (+17%), with Adjusted Net Income at €82m (+27%). Higher refining contribution, on account of operational performance and strong refining margins, as well as improved performance in Petchems and Marketing were the key drivers. The Thessaloniki refinery safely and successfully completed a planned 4-week, full turnaround program, in line with schedule. The refinery was back in operation during 4Q16, with improved financial contribution.

Reported results benefited significantly from inventory gains of €82m, due to crude oil price recovery and the agreement for an insurance compensation of ELPE relating to the post start-up operational issues of the flexicoker unit at the Elefsina refinery during the 2013-14 period, with Reported Net Income at €145m.

Key highlights and contribution for each of the main business units in 4Q16 were:

­        Production amounted to 3.7 million tonnes, affected by the lower utilisation at Thessaloniki refinery, due to maintenance, with white products’ yield at 84%

­        Despite weaker PP benchmark margins, Petchems profitability was sustained at high levels, with Adjusted EBITDA at €25m, while sales were 8% higher at 64k tonnes.

­        Market share gains were the key driver of Domestic Marketing profitability, with Adjusted EBITDA at €9m.

­        International Marketing was affected by lower margins in Bulgaria and Serbia, with Adjusted EBITDA at €11m.

­        DEPA (Public Gas Corporation) contribution to consolidated Net Incomecame in at €15m, due to a significant demand increase from gas-fired electricity generators and weather conditions.