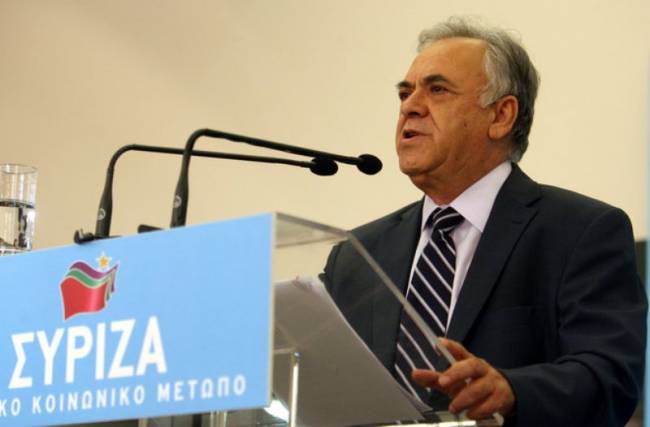 “To promote reforms one must settle the debt issue,” Giannis Dragasakis, the senior economist at anti-austerity party Syriza who are favourites to win Sunday΄s general election, told AFP in an interview.“The possibility of recovery is limited” because Greece is labouring under a debt of nearly 320 billion euros ($371 billion), or 175 percent of national output, he said.Syriza, who have a steady lead of around three points in pre-election polls, are trying to strike a delicate balance between fiscal diligence and debt forgiveness.The left-wing party΄s plan to renegotiate Greece΄s multi-billion bailout with the European Union and the International Monetary Fund is already raising hackles among the country΄s creditors.Dragasakis, says the leftists are not just thinking about helping themselves.“Our proposal does not solely concern Greek debt, but the problem of excessive debt facing many European countries,” he said.“It is necessary to adjust the debt because it is not currently sustainable. The Greek economy has suffered a disaster and its capabilities are currently limited.”Dragasakis is the only one of Syriza΄s leaders to have prior government experience, having briefly served as deputy finance minister in a five-month unity government in 1990.He argues that debt reduction is essentially dictated by the euro convergence criteria — the so-called goals signed in 1992.“If we want to respect Maastricht goals — which require that debt be reduced to 60 percent of GDP — we see no other way but to examine the issue on a long-term basis through a conference. If there are other ideas leading to the same result, we would discuss them in a positive manner.”“Even if the debt were zero, we would have problems without the necessary reforms in the state and civil administration.”Syriza wants to erase over 50 percent of Greece΄s debt, and divert funds that are currently being used to repay bonds to help the country΄s economic recovery.The party maintains that Greece΄s creditors will agree to renegotiate the bailout when faced with a leftist government elected with a strong popular mandate.