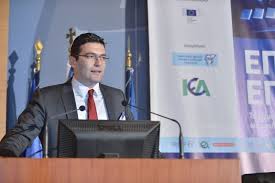 The contribution of DESFA, the Natural Gas Transmission System Operator, to Greek economic development and the increased level of competitiveness of domestic enterprises was the focus of a speech presented by the operator’s CEO, Konstantinos Xifaras, at “Investments in Greece and Growth Potential”, a recent conference co-organized by ACCI, the Athens Chamber of Commerce and Industry – or EVEA locally – and IEA, the Greek Institute of Entrepreneurship and Sustainable Development.

The DESFA head spoke extensively on the operator’s investments, the majority of which have been regional, offering support to local economies while also protecting and creating jobs, and making available natural gas to households and enterprises.

Referring to DESFA’s investment plan for the next few years, involving a capital amount of 280 million euros, Xifaras noted its importance for Greek energy supply security and the country’s geopolitical standing.

He also made note of a new upgrade project at the LNG terminal facilities in Revythoussa, an islet in the Saronic Gulf, close to Athens. This project entails the development of a third storage tank, a project whose budget is worth 159 million euros.

Xifaras said the expansion of a high-pressure gas transmission system in the Peloponnese, a project worth 109.7 million euros, would boost the region’s competitiveness.

Commenting on DESFA’s role in the years to come, the operator’s CEO noted: “DEFSA will play a crucial role in importing natural gas into the European Union, and will stand as a crucial factor in ensuring Europe’s energy supply.”