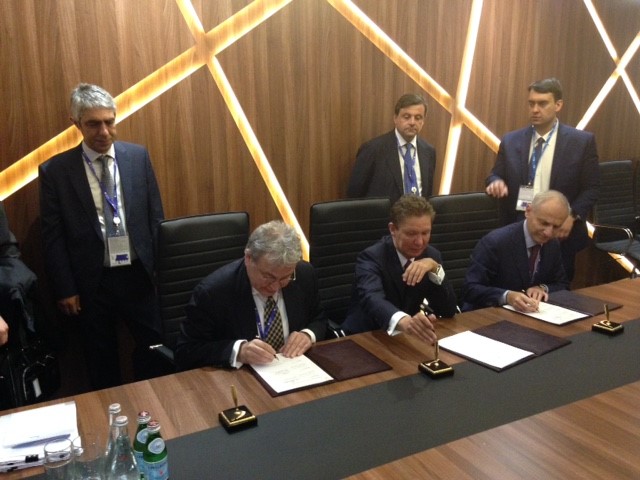 The document was signed by Alexey Miller, Chairman of the Management Committee of Gazprom, Marc Benayoun, CEO of Edisonand Executive Vice President of EDF forGas and Italy,and Theodoros Kitsakos, CEO of DEPAand Chairman of IGI Poseidon, at the St. Petersburg International Economic Forum 2017 in the presence ofCarlo Calenda, Minister of Economic Development of Italy.

The document envisages joint efforts aimed at establishing a southern route for Russian gas supplies from Russia to Europe, which will run across Turkey and Greece to Italy. The three companies will coordinatethe development andimplementation of the TurkStream projectandof thePoseidon projectfrom the Turkish/Greek border to Italy, in full compliance withrelevantapplicablelegislative framework.In addition, the agreement formalizes the arrangements on expanding cooperation in the field of Russian gas deliveries.

In February, 2016, Gazprom, Edison, and DEPA had signed the Memorandum of Understanding on natural gas deliveries from Russia across the Black Sea and third countries to Greece and from Greece to Italy in order to set up a southern route for Russian gas supplies to Europe.

DEPA, possessing a long presence in Greece’s gas market, constitutes a modern and competitive group of companies with a dynamic presence in the energy sector. It promotes strategic infrastructure in order to supply natural gas at competitive prices from diversified sources and routes with a view to assuming a leading role in the markets of the broader southeast European region.

Edison is a leading Italian and European player in the procurement, production and sale of electricity, provision of energy and environmental services and the E&P sector.

Founded over 130 years ago, Edison has contributed to the country’s electrification and development. Today it operates in Italy, across Europe and in the Mediterranean basin, employing 5,000 people. In the power generation sector, Edison has plants with total capacity of 6.5 GW.

The Poseidon pipeline is an import gas project designed and authorized to connect the Greek and Italian gas systems. The project will be further extended for allowing direct transportation into Italy of gas sources available at the Turkish/Greek borders, substantially contributing to the European energy targets on security of supply.