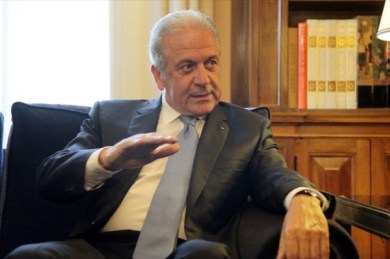 Current Defense Minister Dimitris Avramopoulos will be Greece’s representative on the new European Commission, which will be named later this year.

Prime Minister Antonis Samaras wrote on Sunday to Commission President-elect Jean-Claude Juncker, who is due to visit Athens on August 4, to inform him of his decision to send Avramopoulos to Brussels.

Avramopoulos, who is also New Democracy’s vice president, was chosen for the role after the agreement of coalition partner PASOK. Former Foreign Minister Dora Bakoyannis had been the other frontrunner but Samaras called her on Sunday to tell her that she would not be getting the role.

Avramopoulos is expected to keep his position at the Defense Ministry until November 1, when the new Commission lineup will be revealed. His exit from the government and Parliament will mean that another New Demcoracy MP, Thanasis Plevris, will enter the House.

Samaras and PASOK leader Evangelos Venizelos deemed that Avramopoulos, who has also served as foreign minister in the current government, as well as being in charge of the health and tourism ministers in past administrations, had the necessary experience to represent Greece on the Commission.

Venizelos had also backed the idea of Greece’s current representative, Maritime Affairs and Fisheries Commissioner Maria Damanaki, retaining her position. Juncker had asked for the number of female commissioners to increase. However, Samaras insisted that the representative should come from New Democracy ranks, rather than PASOK.