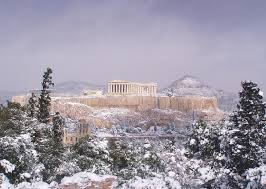 The price of heating fuel may have fallen lately but the series of tax hikes imposed on the fuel in recent years appears to have changed the behavioral patterns of many consumers with respect to their preferences for heating. This was highlighted over the past few days of particularly cold weather in Greece, which prompted a considerable increase in electricity demand.

The last couple of days of snowfall in the wider Athens area and most parts of the country required full utilization of the country’s electricity-producing potential, including PPC’s (Public Power Corporation) gas-fuled power stations, as well as production by independent units, to avoid adequacy problems.

Power demand soared to nearly 9,000 MW, a level reached at the height of summer seasons prior to the ongoing deep recession. Demand peaked at 8,955 MW yesterday evening at 7pm, at a wholesale cost of 150 euros per megawatt hour, for one hour. The average price rate for the entire day was 79 euros. As was also the case a day earlier, demand was highest between 5pm and 10pm.

Apart from PPC’s lignite-fired production, virtually all of the corporation’s natural gas-fueled stations, as well as independent stations were relied on to cope with the demand.

The contribution to the grid offered by PPC’s hydropower stations also proved crucial in meeting the extraordinary demand.