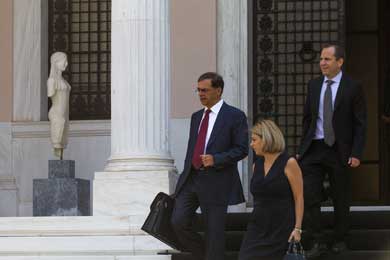 A meeting between Prime Minister Antonis Samaras and Deputy Premier Evangelos Venizelos on Wednesday evening is expected to result in the government settling on its negotiating strategy for the talks coalition representatives are due to hold with the troika in Paris at the beginning of September.

The meeting, due to begin at 6 p.m., is the second the coalition leaders are holding this week as the government gears up for the September 2 rendezvous in Paris. They will be joined by Finance Ministry officials, as well as Development Minister Nikos Dendias, Labor Minister Yiannis Vroutsis, Justice Minister Haralambos Athanasiou, Deputy Administrative Reform Minister Evi Christofilopoulou and State Minister Dimitris Stamatis.

The government officials will look at all the loose ends remaining ahead of the troika’s expected return to Athens in mid-September while also finalizing Greece’s main goals for the Paris meeting. The Greek side hopes to emerge from the discussion with a commitment from the troika regarding the moves that will follow the conclusion of the fifth review of the country’s adjustment program, particularly with regard to further debt relief and whether Greece’s lenders will insist on a third bailout package.

However, the troika will also want to see signs that Greece is set to meet structural reform targets. These include speeding up the pace at which justice is delivered. It is estimated that there are some 400,000 cases currently outstanding at Greek courts, 100,000 of which are related to tax matters.

Also, Greece has to fire another 6,500 civil servants by the end of the year. However, Administrative Reform Minister Kyriakos Mitsotakis is facing resistance on this issue, particularly from coalition partner PASOK.

The Socialists are also opposed to the changes to labor regulations being demanded by the troika, including the right for employers to refuse employees the right to work during a labor dispute, also known as a lockout.