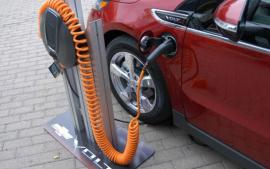 Electric vehicles and the new entrepreneurial opportunities being created by their market penetration, was the topic of discussion at a one-day seminar staged in Athens.

“Many potential applications of electric vehicles exist in Greece,” noted Mr. Giorgos Ageridis, president of ELINHO, the Greek Institute of Electric Vehicles. Cities and islands provided the greatest amount of opportunities, he added.

Entrepreneurial opportunities were also opening up in fields such as computer technology, telematics, telecommunications, and automation, according to Mr. Sotiris Kapellos, president of the Hellenic Association of Photovoltaic Companies, or SEF.

The requirement of incentives that would encourage and simplify the use of electrical vehicles was the issue raised by Mr. Fokion Deligiannis, the Businesses and Industries Association’s head of the Infrastructure and Entrepreneurial Environment division. Incentives that could apply, he suggested, included exemption from registration fees and a wealth-indicator system applied by Greek tax authorities that takes into account vehicle ownership, as well as free parking at local government parking facilities, in conjunction with local councils. Contrary to financial incentives, such incentives would promote balanced, overall development, Mr. Deligiannis stressed.

The supply and sale of electricity, as well as the provision of licenses to supply and sell electricity, as stipulated in an amendment to law 4001/20111 drafted by the  Regulatory Authority for Energy, RAE, was analyzed by Mr. Evangelos Dialynas, a RAE board member. The possibility of network problems, due to factors such as an   over-accumulation of charging stations, was also discussed. It was pointed out that inspections by the Hellenic Electricity Distribution Network Operator, DEDDIE, were necessary, as was the implementation of development policies and determination of areas where infrastructure could be created. As things stand, the country’s electricity supply is guaranteed until 2020. The drop in demand amid the recession of the past few years has eased the pressure.