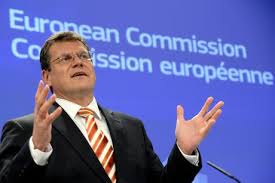 Brussels has raised the stakes in response to Russia’s aggressive energy policy by announcing it plans to double, sooner than planned, the capacity of natural gas to be transmitted to the European Union from Caspian Sea region producers such as Azerbaijan and Turkmenistan, through the TAP (Trans Adriatic Pipeline) project, the European Commission’s Vice President Maros Sefcovic, in charge of Energy Union, has declared from the Azeri capital Baku.

“Technically, the project may transmit ten billion cubic meters annually, but this figure can be doubled to twenty billion cubic meters, both because the Shah Deniz gas deposit in Azerbaijan has major potential and because neighboring Turkmenistan also wants to export natural gas quantities to Europe,” remarked Sefcovic, in Baku for a Southern Corridor advisory council meeting that was also attended by Greece’s newly appointed Production Reconstruction, Environment and Energy Minister Panayiotis Lafazanis.

The comment may be deemed as a direct response from Brussels against Moscow’s recent talk of a rival regional infrastructure project, the Russian-Turkish plan Turkish Stream, that would make an underwater crossing though the Black Sea to transmit Russian natural gas to the Greek-Turkish border in eastern Thrace. It has yet to be clarified how the route would carry on into EU markets from there.

Such a development would oppose the EU’s TAP-related plans for the Southern Corridor, a 4,000-kilometer route aiming to supply natural gas from the Caspian and Middle Eastern regions to Europe through the incorporation of various pipeline projects. TAP constitutes the final segment of the Southern Corridor’s overall route.

Russia’s declarations and regional maneuvering have alarmed the European Commission, prompting Sefcovic to question both the purpose and feasibility of Moscow’s Turkish Stream proposal. Greece, officially backing the TAP project, is also toiling with the idea of becoming involved in the Turkish Stream plan. Details here also remain unclear.

BP, which holds a 20 percent stake in the TAP consortium, had declared last December, as energypress had disclosed, that it intended to accelerate the decision to double the annual supply of Azeri natural gas to Europe to twenty billion cubic meters, beginning in 2020, when the TAP project is scheduled to be launched. This has always been a part of the Southern Corridor’s plan, but had been planned for its second stage, following the 2020 launch, assuming the Azeri deposit in Shah Deniz was further developed.

Following the apparent debacle of another Russian pipeline plan for the region, South Stream, BP decided to redraft its strategy and capitalize on the subsequent shortage of gas supply to Europe. The South Stream plan had envisaged transmitting 63 billion cubic meters of natural gas to Europe per year.

Plans for an active role by Turkmenistan in European gas supply are not new. If incorporated into the network, the country’s infrastructure would be connected with Azerbaijan’s.