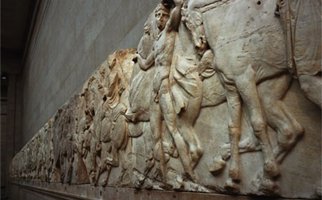 The majority of Britons think that their country should return the Parthenon Marbles to Greece, a new poll has found.

According to the survey, which was conducted by the YouGov international market research agency, 37 percent of respondents said that the ancient sculptures should be given back to their country of origin. Twenty-three percent said the marbles should remain at the British Museum in London. Meanwhile, 32 percent said they were indifferent about the issue and 7 percent said they did not know.

Asked about why Britain should give up the artifacts, most of those who argued for their return said that they “are one work of art and they should be reunited along with the rest of the Parthenon sculptures in Greece.”

The poll took place on October 16-17 in the wake of a three-day visit by a London-based legal team including Lebanese-born lawyer Amal Alamuddin Clooney for talks with Greek officials over a potential bid to claim the marbles.