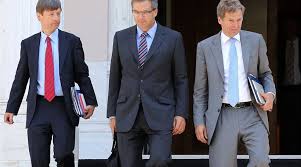 Greece’s creditors insist the country should retain precautionary backstops next year even as the government presented an almost balanced budget for the first time in decades, according to two officials with knowledge of the matter.

The country’s improving public finances haven’t convinced its euro area partners to accept Prime Minister Antonis Samaras’s plan for a clean bailout exit at the end of 2014, according to the officials, who asked not to be identified because the talks are private.

Greece returned to bond markets in April, when it sold debt for the first time in four years, and Samaras has repeatedly said that the country will be able to cover its financing needs in the markets after the euro-area program expires in December. Samaras has said that the country would potentially forgo some remaining tranches from the International Monetary Fund if necessary.

The government plans to issue 7-year and 10-year bonds, according to the draft budget, which doesn’t provide details on the timing. It will also sell treasury bills with maturities longer than six months, the current maximum, without increasing the overall stock of bills.

Greece’s creditors would prefer to keep some form of credible backstop in case market conditions worsen, said the people. The prevailing view among officials from the European Commission, the European Central Bank and the IMF, who monitor Greece’s compliance with the terms of its bailout, is that the country’s market access remains fragile, one of the people said.

ECB President Mario Draghi weighed into the debate last week, saying the country needs to remain in some kind of program for Greek banks’ junk-rated asset-backed securities to be eligible for the Frankfurt-based central bank’s liquidity-enhancing ABS purchase program.

Greek GDP will expand 2.9 percent in 2015 after growing 0.6 percent this year, its first annual expansion in seven years, according to the draft budget. Those forecasts are the same as in the IMF’s most recent report on Greece in June. General government debt will fall to 168 percent of GDP next year, or 316 billion euros, from 175 percent this year, the highest debt ratio in the euro area, according to the draft.