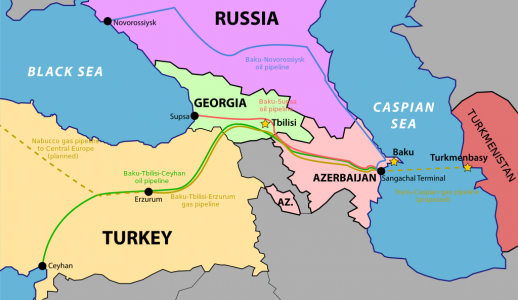 In May, when Russian-backed militants took over numerous towns in southeastern Ukraine and began to face resistance from Ukrainian troops, and the West began to contemplate further rounds of sanctions against Russia, Malena Mard,  head of the EU delegation to Azerbaijan said that implementing the Trans-Caspian Pipeline (TCP) would be a good opportunity to diversify energy supplies, oilprice.com reported.

So due to political exigencies, the EU began in earnest to try to facilitate diplomacy between Azerbaijan and Turkmenistan on the project, begun in 2011, but later dropped as the two countries failed repeatedly to resolve their differences and Brussels could not offer substantial investment in infrastructure without an upstream stake.

Now, it’s not just that the EU has contemplated reducing purchases of Russian gas as punishment for the forcible annexation of Crimea and ongoing warfare in Ukraine;  it’s that they have to plan for the admittedly unlikely exigency that Russia itself could halt sales or even deliveries in retaliation for increasing Western sanctions. Only Turkmenistan and Azerbaijan have the gas reserves needed to serve Europe’s needs outside of Russia.

In June, with Russia’s offensive against Ukraine in full swing,  Europe made the decision to re-open talks with Turkmenistan which had been allowed to lapse when not only the over-ambitious Nabucco pipeline project was abandoned, but the TCP had been shelved in favor of smaller projects, Tengrinews.kz and Turan.az reported.

“We are still in the planning phase and we hope that the laying of the Southern Gas Corridor will contribute to accelerating the discussions for the TCP as well,” EU Commission President said.

The TCP did not seem as hypothetical as it had in previous years because the smaller projects were indeed getting off the ground.

In December 2013, BP announced its investment in the consortium led by SOCAR with the Turkish state companies Botas and TPAO to build the Trans-Anatolian Natural Gas Pipeline (TANAP), originating in the Shah Deniz II fields in Azerbaijan and crossing Turkey. TANAP was scheduled to begin construction this year by the Austrian firm WorleyParsons. TANAP is then due to hook up to the Trans-Adriatic Pipeline (TAP) launched by  a consortium led by SOCAR with BP, Statoil, Fluxys, Axpo and now Enagás, due to start construction in 2015. There is also the second branch of the Baku–Tbilisi–Erzurum pipeline (BTE) which broke ground in September.

In July, UK’s Energy Minister Michael Fallon told journalists in Baku that the UK supported the TCP, and that the war with Ukraine “makes more relevant the issue of reducing Europe’s dependency on Russian case,” Trend.az reported. Fallon stressed that implementation of the project would  bring more stability and that the EU was prepared to place more sanctions on Russia – and so was looking for alternatives.

All of these pipeline are literally interconnected with the prospect for Turkmen gas to reach Europe – but they’re not there yet, so neither is Ashgabat. The hope has been expressed in the past, as Radio Liberty/Radio Free Europe has indicated, that ultimately not only gas from Turkmenistan, but Kazakhstan and even Uzbekistan might be piped through the Southern Gas Corridor, once all the smaller projects are linked together. For this to happen, the Central Asian countries – all of whom have tremendous Chinese investment in their economies — will need to be assured that the EU is a viable partner and that Russia will not interfere.

At a conference at the Elliott School of International Affairs of George Washington University on September 22-23, Adam N. Stulberg of Georgia Institute of Technology presented a policy paper where he  outlined Moscow’s use of its “gas weapon” to coerce other states in a range of ways: “subverting European Union governance by manipulating splits among unevenly dependent member state consumers, to playing off Europe and Asia with construction of the Russia-China gas pipeline, to exploiting transatlantic differences more generally in a run-up to Cold War 2.0.”

In a controversial op-ed piece in The New York Times September 10, Brenda Shaffer, a professor of political science at the University of Haifa, a visiting researcher at Georgetown and consultant to Azerbaijan’s state oil and gas company SOCAR, spoke of Russia’s potential “land grab” and “open warfare…under the guise of peacekeeping” which could destabilize the South Caucasus and “derail a huge gas pipeline project, agreed to last December, that might lighten Europe’s dependence on Russian fuel.”  The reference was to TANAP. Was such a scenario even possible?

Asked if Russia could serve as a spoiler to the project, Stulberg said he believes Russia would not have motivation to interfere, as its action against European projects might rebound against Russia’s effort to convince EU to back South Stream despite sanctions, and would also bump against Turkey which is a partner in  TANAP. Russia would not want to jeopardize relations with Ankara, which have increased in recent years; Moscow has signed an agreement to finance and build Turkey’s first nuclear reactor.

Russian has not yet shut off Ukraine’s gas as it did in 2006 and 2009, but Kiev’s $1.5 billion gas bill is coming due imminently, and Russia is telling the EU to help pay it. The time is not propitious for bargaining.  “The EU has to make a decision to pay a premium price for pipe gas,” says Stulberg.

Stulberg believes in any event that  infrastructure is evolving more and more to LNG, and that the era of giant pipelines is receding, as an “increasingly dense infrastructure” is being created by new, shorter routes and hubs as “multiple pipeline and LNG import facilities, interconnectors and reverse flow options, new gas storage facilities, and a deepening of cross-border commercial ties are converging to constitute a Europe-Eurasian gas network.”

Russia will still be a “supply anchor” in this new, denser and more flexible network.  But as Moscow Times explained October 27 about the first independent LNG delivery to  Lithuania’s floating terminal, Russia’s “ability to leverage [energy resources] as an instrument of foreign policy is diminishing.”

Moscow had more direct reasons not to antagonize Baku which Turkmenistan will watch closely. In May, Russia’s state energy company Rosneft, whose chief executive, Igor Sechin, and his company are now under US and European sanctions over Ukraine, signed a joint venture agreement with SOCAR to develop the energy sector in Siberia and the Russian areas of the Caspian Sea. The Economist said “political considerations” influenced the deal; by making Russia a stakeholder, Baku was pre-empting possible pain over gas delivery to Europe without Russia.

Thus, multiple, smaller interconnecting projects and the building of bilateral and multilateral ties along the way may work better than ambitious larger pipelines. In a paper for Rethink Institute, authors Michael J.G. Cain, Rovshan Ibrahimov and Frevzi Bilgin noted that “regional politics when combined with commercial interests and local market development can trump geopolitical resource competition.” Will they eventually come together in the form of the Trans-Caspian Pipeline supplied from Turkmenistan?

Asked about the TCP’s prospects, Ilya Zaslavsky, Robert Bosch Fellow at Chatham House, and Head of Central European and Caspian Research at Horizon Client Access commented, “I do not believe in any prospect of the TCP in the near future or even before 2020 or even while Putin is in power. They have never even done the feasibility study — after years of talk about it. It is all a diplomatic game.”

Zaslavsky pointed out that even Iran was now dropping its purchase of Turkmen gas with no complaint from Ashgabat. Certainly the West, always uneasy with Ashgabat’s courting of Teheran, was not protesting. As Bruce Pannier of Radio Free Europe/Radio Liberty has pointed out, Iran may turn from Turkmenistan’s customer into its competitor – again, a hypothetical, assuming the West will drop its reluctance to do business with Iran, given its nuclear issues.

This is why analysts caution that the EU’s overture regarding TCP are more about optics than capacity. Regarding the TCP, at the Elliott School conference, Pavel Baev of Norway’s International Peace Research Institute (PRIO) commented, “Such projects are pretty far-fetched and the EU is no longer seen as a serious player in this field.”  China is adding purchases every year and will “own this corner,” says Baev.

The same harsh reality that drives the need for the EU’s search for alternatives in the first place causes the lack of progress in contracting directly with the Caspian countries: fear of Russian retaliation in some form. Demarcation of the Caspian Sea bed and direct bilateral relations with the EU on pipeline deals mean circumventing the central Caspian dispute — Iran’s demand to divide up the Caspian’s resources equally five ways, Turkmenistan’s and Azerbaijan’s preference to divide the Caspian along existing national borders, and Russia’s interest in delaying progress to avoid having other members supersede it.

And now another regional brake on TCP may be that the partners of the prospective Turkmenistan-Afghanistan-Pakistan-India (TAPI) pipeline – to which Ashgabat has devoted far more attention — may be jealous. In  June, Pakistan’s Tribune reacted to the news of the re-start of TCP talks by expressing concern that it could bury the TAPI project. Officials even seemed to believe that they might become “a victim of US policy” — even though with the withdrawal of US companies from TAPI and little interest in TCP, it would hardly be the case.

Despite more than a decade of Western negotiations based on the premise of Ashgabat’s own profession of a “multi-vector” foreign policy, avidly promoted in particular by the US, Turkmenistan has only ended its own dependence on Russia by moving to deal nearly exclusively with China.  Russia, formerly Turkmenistan’s largest customer, has reduced its purchases to 10-11 billion cubic meters a year China is now buying the bulk of Turkmenistan’s gas, and has concluded at least $7.6 billion in agreements with Ashgabat, now its largest supplier.

Yet lessening dependency on Russia has not meant collaborating with the West, despite Turkmenistan’s past expressions of resolve. Nor has it brought any fresh willingness from Russia’s antagonist, America, to offer any large capital investment without a stake.

So Ashgabat is back to relying on China. Why accept the risk of antagonizing Russia or waiting for EU resolve to express itself in financing when it can deal with China, which has been both reliable and generous since 2009 – and is even now bailing out Russia, too, from its rejection by the West over the war in Ukraine?

While the pieces of the puzzle seem to be coming together for everyone else involved in the Southern Gas Corridor, Turkmenistan is still only a potential partner. Much will depend on whether TAP and TANAP proceed smoothly without political risk or cost for Ashgabat.