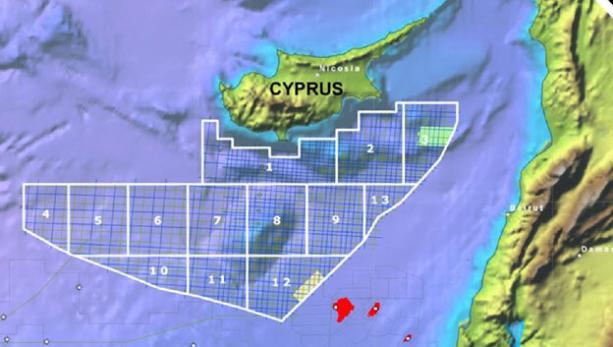 New tensions between Turkey and Cyprus have led to the disruption of the peace talks aimed at reuniting the divided island of Cyprus. On October third, the Turkish Government issued a NAVTEX note announcing its plans to carry out between October 20th and December 20th seismic surveys within offshore blocks of the Cyprus’ EEZ already licensed through international bidding. These surveys include a block where the Italian ENI – Korean KOGAS consortium is currently carrying out exploratory drilling. As a result of Turkey’s actions, President Anastasiades decided to suspend his participation in the talks for the settlement of the Cyprus issue.

ENI/KOGAS’ activities are of high importance for the island. The Republic of Cyprus has hopes that the consortium will encounter additional amounts of natural gas that will justify the commercial viability of a multi-billion onshore LNG terminal to be built on the Vassilikos coast of Cyprus. Noble Energy announced its discovery of the Aphrodite field in Block 12 of the island in 2011, but the field is estimated to hold between 3.6 to 6 Tcf (with a mean of 5 Tcf), not enough to encourage a final investment decision for the LNG project. Cyprus adopted the LNG terminal as a national project given its belief that the strategic location of the island connecting the East to the West, its EU membership and the longstanding excellent relations with all neighboring countries (Lebanon, Cyprus, Israel, Egypt and Jordan) are favorable to it becoming a regional energy center, acting as a factor of stability.

Why has Turkey escalated the conflict?

Turkish authorities have been consistently adopting the same policy of opposing any exploratory activities off the island’s coast before a settlement is achieved. The Turkish accuse the Cypriots of unilateral exploratory activities that will only benefit the Greek part of the island whilst the Greek Cypriot leaders accuse Turkey of violating the sovereign rights of the Republic of Cyprus to exploit its own waters.

In fact, the United Nations recognizes the sovereignty of the Republic of Cyprus over the entire island of Cyprus which includes its land and waters. In line with the provisions of article 12 UNCLOS, the Republic of Cyprus signed delimitation Agreements with Egypt (2003), Lebanon (2007) and Israel (2010) on the basis of the median-line principle. Cyprus has licensed 6 out of 13 Offshore Exploration Blocks in the southern part of its EEZ. The first discovery (Aphrodite) in Block 12 which has been announced by US Noble Energy in 2011 is currently being appraised, while in September 2014 the Italian-Korean consortium ENI-KOGAS initialed its drilling operations in Block 9 as more prospects have been identified.

Sir Michael Leigh, senior advisor to the GMF, in his article Why Is Turkey Increasing Tensions in the Eastern Mediterranean? posted on the GMF blog on 10 October 2014,  advances another reason for the friction. He says that some believe that Turkey, through its action, is looking to “move the offshore energy issue into the settlement talks, a step opposed by the Greek Cypriot side.” Leigh also wonders if it is not simply caused by Eroğlu (the President of the self-proclaimed and Turkey recognized Republic of Northern Cyprus) wanting to flex his muscles in preparation for the April 2015 leadership election in the northern part of the island.

Despite Greek Cypriot leaders’ promise that the hydrocarbon resources discovered in the island’s waters will benefit all Cypriots, including those residing in the northern part of the island, Turkey refuses to believe in the good intention of the government of Cyprus and blames it for interrupting the peace talks. The mutual distrust is constituting a barrier to an effective collaboration between the two states.

The division of the island

The tension between Cyprus and Turkey is not new. The island has been divided since 1974, when Turkey invaded the northern part of the island following a military coup d’état against the President of Cyprus Makarios III carried out by by the Greek military junta. As a result to the coup, Turkey invaded 36.2% of the island. At the time, 18% of the population was Turkish Cypriot. To this day, the territory remains under Turkish occupation.

In 1983, Turkey formally created and recognised a political entity in occupied Cyprus. The “Turkish Republic of Northern Cyprus” has not been recognized by any state other than Turkey, which exercises military control over it. This entity has been declared illegal and its actions null and void by the international community and condemned by United Nations and Security Council resolutions such as UN Security Council Resolutions 541 of 18 November 1983 and 550 of 11 May 1984. The UN Security Council Resolutions have called on all UN member states not to recognize the Turkish Republic of Northern Cyprus, assist it or facilitate its existence in any way.

The gas factor and the division of the island

Forty years after the division of the island, the hope that the natural gas lying under the island’s seabed will serve as a catalyst for a settlement of the Cyprus problem is slowly fading. Whilst there is no immediate danger to ENI and KOGAS’ activities, the italian company “being determined to carry on with drilling” according to the minister of energy of Cyprus Yiorgos Lakkotrypis, “the presence of Turkish warships in adjacent sea areas increases the risk of an incident at sea. Such an incident might well be inadvertent, resulting from proximity of warships to the drill ship.” says Leigh.

In May of this year, Joe Biden visited the island of Cyprus where he met with Anastasiades and Eroglu. The visit was considered to hold historical significance given that Joe Biden is the most senior U.S. official to visit Cyprus since Lyndon Johnson in 1962. During his visit, Biden stressed on the importance of the hydrocarbon discoveries in positioning Cyprus as an energy leader in the region and a natural gas exporter helping the EU ease its dependence on Russian gas. Biden also expressed his support to the peace talks aimed at reunifying the ethnically split island.

Dr Sohbet Karbuz, director of the hydrocarbons division at Observatoire Mediterraneen de l’Energie, told Natural Gas Europe: “ENI knew it would face these kinds of challenges.” Karbuz added: “Natural gas could be a perfect catalyst for quickening the peace talks. Instead of taking this opportunity to settle the half a century long dispute for good, the politicians on both sides try to use it for political gains in domestic affairs.” Leigh also believes that optimism must prevail to end the conflict: “There are inevitably ups and downs in efforts to resolve it. The two parties came close to success in 2004. Recent developments should be viewed as an incident and should not discourage new efforts to address the outstanding differences between the two sides.”

* Karen Ayat is an analyst and Associate Partner at Natural Gas Europe focused on energy geopolitics. She reads International Relations and Contemporary War at King’s College London focusing on Natural Resources and Conflict. She holds an LLM in Commercial Law from City University London and a Bachelor of Laws from Université Saint Joseph in Beirut