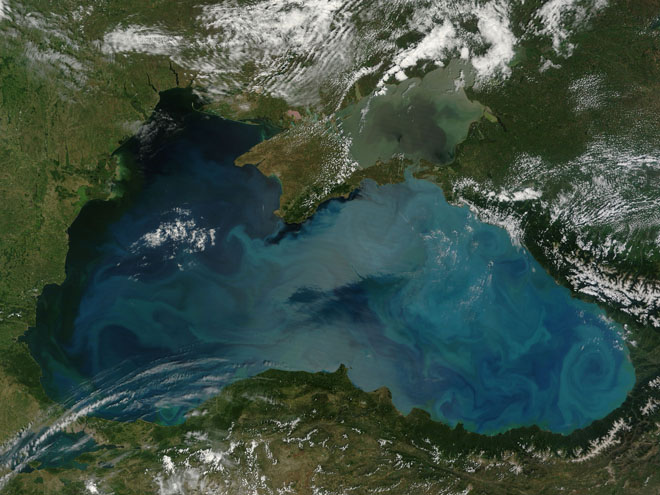 The good news that the global oil price slump has brought onto final consumers in general in Europe might soon take its toll from investments in the European oil and gas sector. Lower oil prices are certain to modify gas prices as well, on account of long-term deals with oil indexation.

While North Sea oil and gas investment was already strained due to the depletion of most mature fields and is bound to be further troubled by low oil prices, a newer and promising region could be affected as well: the Black Sea. To this extent, investment in at least three Black Sea countries are to be watched in the next months: Bulgaria, Turkey and Romania.

In Bulgaria, Prime Minister Boyko Borisov is preparing to turn the country into the EU’s next gas hub on account of its yet-untapped gas volumes in the Black Sea. Indeed, Bulgaria’s Khan Asparuh block shows promise at an estimated 100bcm of natural gas from drilling of up to 2000 m depths, and some gas could also come from its Silistar and Teres blocks, albeit the government has yet to even start research necessary prior to extraction.

However, the consortium made up of France’s Total, Austria’s OMV and Spain’s Repsol, just recently announced that it will delay the start of drilling in Khan Asparuh by one year, with a fixed date not yet specified. Drilling was supposed to begin in mid-2015, but the consortium had to recalculate its budget because of the oil prices. The latter two blocks had a tender open just in December in order for investors to bid on exploration rights, but it is unknown whether they will be successful. A previous tender, in 2013, for the Teres block was cancelled due to investors’ lack of interest, so it remains to be seen if any bidders will enroll in the current one. Bulgaria’s political will, might, therefore, be derailed by investors’ fear of taking on completely new projects which offer no certainty.

In the Turkish sector of the Black Sea, state-owned Turkish Petroleum Corporation (TPAO) and Royal Dutch Shell began their 300m exploration drilling project just in January, one year ahead of the planned date, in the Western Black Sea, 100 km off the coast of Istanbul. Both this early start and the fact that Turkey is building its own seismograph research vessel to begin oil exploration in September of this year are signs of Turkey’s commitment to long-term projects in the Black Sea.

In light of this, investors are likely to consider withering the lower gas prices under the long-term umbrella of investment security offered by the Turkish government, which, for one thing, has put its own TPAO on the line, and, for another, is now gaining easy money from cheaper imports of gas (around $6bn since the beginning of the slump, and around $12-13bn to come this year if lower prices are maintained, as estimated by Turkish Energy Minister Taner Yıldız); the money could be made available to domestic oil and gas explorations if necessary.

On a different note, the fact that Ankara, which is currently the second strongest player in the region, after Russia, when it comes to energy, is so adamant in exploring Black Sea deposits, could also be an argument in favor of the view, clearly explained by Robert Cutler, Research Fellow at the Institute of European, Russian and Eurasian Studies, Carlton University, Canada, that Turkish Stream has little chance of ever coming online and is merely a ploy for Russia to get the EU to lift sanctions.

Finally, the fate of Romania’s Black Sea oil and gas deposits lies somewhere in the middle, when compared to the other two. Romania had a better start than Turkey and Bulgaria in both the oil and gas sector. Exploration is well underway in its Neptun bock, estimated so far at 42-84bcm of natural gas, but possibly larger, as shown by new discoveries still being made, such as the recent Domino 2 and Pelican South. Furthermore, new discoveries in the Istria perimeter last year add an estimated extra 1.500 – 2.000 boe/day to come online in the next 3-4 years. And the Black Sea is not the only sector with potential for Romania, OMV Petrom along with Hunt Oil having discovered, at the end of last year, the most significant field in Romania’s South of the past 30 years, estimated at 1200-2100 boe/day.

In light of all these, until recently, the government’s only issue with regard to oil and gas exploration was what to do with the money and whether to build a sovereign wealth fund or not. But tables have turned and low oil prices have put a strain on OMV Petrom’s budget, causing it to rethink some of its projects.

This volatile investment climate puts pressure on the government to offer proper conditions in order to incentivize further investment, though it has yet to rise up to the occasion. Last year was expected to bring an improved royalties system for Romania’s new oil and gas projects, but the government decided to push the decision by one year and to pass responsibility for it to the Parliament. Pressure is, therefore high for a decision to be taken this year, though the wait has already weakened the government’s position in talks with companies, which are now likely to bring their low oil price-losses into the equation. Blunders such as the one by the national fiscal watchdog, ANAF, in January which might ask for retroactive VAT payments from drilling platforms, once it decides whether they can be viewed as naval vessels or not, as well as the uncertainty around whether a special construction tax should or should not be applied to offshore constructions are likely to put investors on high alert. These types of faux pas are the exact opposite of the safe investment climate that Turkey is offering, and even place Romania behind Bulgaria, which should at least get credit for strong political will.

Apart from a transparent, coherent and fair royalties-system, the government must now also prove long-term commitment to investments being made by starting work on infrastructure to transport the gas from the Black Sea onto the national grid, on the one hand, and to make it available for exports, on the other. Prime Minister Victor Ponta’s talk with his Serbian counterpart, Aleksandar Vučić, to bring Romanian Black Sea gas into Serbia are a step in the right direction, if they develop into concrete projects in the next months. Also, the Giurgiu-Arad pipeline, proposed by Romanian TSO Transgaz, as part of a larger pipeline between Bulgaria and Austria, including Romanian natural gas from the Black Sea (through the building of an additional segment to connect it to the coast), should soon start showing progress if investors are to keep faith in the government’s intentions.

*  Anca Elena Mihalache is a Senior Analyst with the Energy Policy Group, a Romanian think-tank specializing in energy security