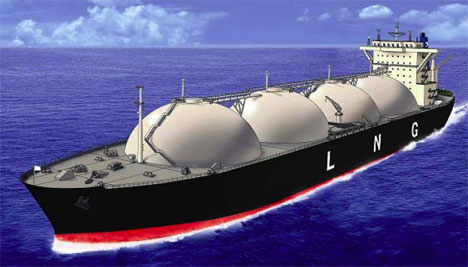 Liquefied natural gas has recently been the focus of interest in the international shipping sector. During recent years, there have been many announcements of LNG vessel orders from both Greek and Chinese ship-owners, who excel in this rapidly growing market.

Despite the positive environment, the decision for the construction of an LNG vessel is not easy. A liquefied natural gas tanker requires an investment of about $250 million, which corresponds to approximately four times the value of any other floating transportation vehicle of equal capacity.

What makes this decision even harder is the time lag between the time of order and the launching of the newly built vessel. During this time – which indicatively ranges between 2 to 4 years – significant risks are at play which could significantly alter the value of the vessel, which however is under construction for a pre-agreed price.

First, there is the inherent uncertainty of the global demand and supply of LNG in the markets. Will demand for transport capacity be sufficient at the time of the launch to justify the addition of this vessel in the international LNG fleet? If not, then competition will lead to an erosion of the freight rates limiting the commercial viability of the vessel.

Secondly, there is the risk of a rapid change in the technology standards. This is a central determinant in the profitability of a vessel. In particular, the rapid progress of technology may unexpectedly degrade the competitiveness of a ship as it affects its energy efficiency, fuel consumption as well as carbon emissions. Thus the technological competence of a vessel is always a risk which affects its operating efficiency, as it influences the competitiveness of the freight rates that it can offer, and thus the margin that the ship owner can make.

Therefore, one can easily understand the importance that access to reliable information gained via close collaboration with experts in the hydrocarbon industry has for ship owners; as such information provides them with the ability to better anticipate the future developments that have an impact over their investment decisions.

Apart from the ship owners, a substantial share of the responsibility for maintaining the balance in the LNG market can be attributed to the contracting side of the equation, i.e. the producers and traders of LNG. In this category one can come across some of the most recognizable names among the national and international oil companies, taking the role of both the producers and recipients of large quantities of liquefied natural gas.

Their estimates for the future supply and demand of LNG are based on their expectations on the development of future liquefaction and gasification projects, in which many times they are partners; as well the economic growth, energy mix patterns and progress of exploitation of new reserves in producing countries. Based on the above they formulate their forecasts, which are only rarely published.

This raises the risk that the ship owners may not know exactly what their customers are thinking for the future. Which might lead to “asymmetric actions” between the two sides, thus inflating the risk of a disproportionately high number of vessels being constructed, reducing thus the global freight rates. Considering these recent looming exit from the “stone age” of the shipping sector, which saw five years of record lows in the international freights, the aforementioned possibility would have serious consequences for some players in the industry.

The existing international LNG fleet represents 392 ships according to Lloyds, i.e. a global available capacity equivalent to about 31 million tonnes. According to the same source, more than 131 new ships are already under construction, which will increase the aforementioned capacity by 3 million tons. Meanwhile, according to the BG Group, the international transported volume of LNG in 2013 equated to 239 million tonnes. Assuming a mean duration of travel of each ship of about 30 days, then the average annual utilization of each vessel corresponds to 63%. However, BG considers that the global LNG demand is expected to increase by 250% by 2030, which then indicates the need new ships, especially taking into account the fact that 10% of existing ships are over 20 years old.

Nevertheless, this conclusion is based primarily on expectations regarding the development of new reserves and the construction of new LNG infrastructure, for most of which a final investment decision has not been made yet. Provided the current economic environment, and combined with the rapid geopolitical and technological developments, the implementation of these plans is always under a great degree of risk. Typical examples from the recent past are the enormous variations in the quantities of LNG produced in Angola and Nigeria, as well as the cancellation of a significant number of gasification plant projects in the US due to the rapid development of the domestic shale gas production.

In several cases the solution of an offshore pipeline is preferable to the LNG option, as the indicative cost for the construction of a natural gas liquefaction plant currently starts at 6-8 billion dollars, without including any additional investments which might be required across its supply chain. Therefore, the possibility of some LNG projects being replaced by pipelines will have a direct impact on the future LNG traded volumes.

It is almost certain that gas quantities deriving from the US and Australia will find their way to the international markets via the liquefaction process. But can anyone be equally certain that the same will apply for volumes coming from areas such as Russia, the Middle East and the Eastern Mediterranean, as it is currently expected?

In conclusion, the shipping companies that invest in LNG carriers must protect their business and act reasonably in preventing the potential for overcapacity in the global fleet. This would weaken the freight rate and therefore would significantly undermine the viability of any newly acquired vessels. It is therefore clear that those involved in the global LNG market – and particularly the ship owners and the international natural gas producers – must work together and make sure that efficient platforms for the exchange of information and forecasts are in place. Their common goal should be to coordinate their actions and their investment decisions for the orderly development of the LNG market. Otherwise, the maritime sector will remain under the risk of “shoot itself at the foot” by overinvesting.

* Dr. Angelos Gkanoutas-Leventis and Alexandos Lagakos, co-founders of the Greek Energy Forum. The views expressed in the article are personal and do not reflect the views of the Forum or those of their employers.