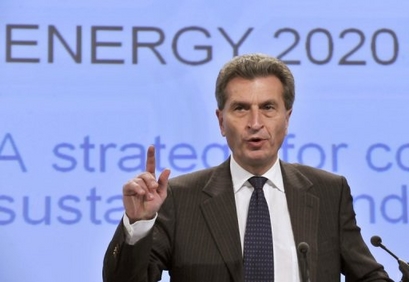 I very much welcome this joint Roundtable organised by the College of Europe and the Commission’s Directorate-General Energy. It can only be of benefit to both that they think together on topical issues and political priorities of the EU and in this sense, the signature today of a Memorandum of understanding between the two is a positive development.

Thank you for giving me the opportunity to say a few words on the issue of energy security, which has once again become a political priority due to the energy-related concerns resulting from the current tensions between Russia and Ukraine.

Russia is our foremost external energy supplier and Ukraine a key transit country for energy resources to the EU. In this context, any disruption in supplies from them would have an important impact on the EU. I must, however, underline that much has been achieved since the last major disruption in 2009 to improve our energy security situation – including new interconnections, Liquified Natural Gas (LNG) facilities and reverse flow capabilities.

As a response to the current uncertainties, the European Council requested on 21 March of this year an Energy Security Strategy and comprehensive plan to reduce energy import dependency. Less than two months later, on 28 May, we presented a comprehensive Strategy with a series of detailed proposals. These proposals benefited from the input received from several Member States and from industry.

Let me start with the three most important orientations in our view.

Besides these three points, let me also mention a few key policy proposals put forward in our communication.

Europe needs to achieve a better functioning and a more integrated energy market. New infrastructure investments promoted by dominant suppliers must adhere to all internal market and competition rules. This is why we said that the South stream project should be suspended until full compliance with EU legislation is ensured and re-evaluated in light of the EU’s energy security priorities.

We need to include our most exposed neighbours in our energy security strategy, notably Ukraine, Moldova and the Western Balkans. The recent agreement on reverse flows between the Slovak Republic and Ukraine is to be welcomed in this respect.

Furthermore we need to intensify our diversification efforts. In the coming years, LNG will be an important flexibility element and we need to better use our existing and future regasification capacities. We will also need a reinforced partnership with Norway, the acceleration of the Southern Gas Corridor and the promotion of a new gas hub in Southern Europe.

And we are proposing to our US colleagues that energy should be covered in the Trans-Atlantic Trade and Investment Partnership (TTIP) to underline our shared common vision of energy security and sustainability – that this is best achieved through open, competitive and transparent international energy markets and through supportive policies that promote the sustainability of energy production and consumption, in particular the development of renewable energies and energy efficiency.

Energy security objectives should also be fully reflected in the implementation of the EU financial instruments in the period 2014-2020, in particular using the European Regional Development Fund, the Connecting Europe Facility, Horizon 2020 and the European Neighbourhood Policy Instrument.

Finally, we consider that more coordination of national energy policies is necessary to respond credibly to the challenge of energy security. National choices over energy mix or energy infrastructure affect other Member States and the Union as a whole. Member States should better inform each other and the Commission when defining their long-term energy policy strategies and preparing intergovernmental agreements with third countries. Further efforts are needed to ensure better synergies between energy objectives and foreign policy and to speak to our partners with a single voice.

The European Energy Security Strategy we are proposing is comprehensive and balanced. Many specific proposals will need to be further detailed and discussed. But the proposed general orientations are clear and should be the basis for a thorough discussion and for strong political decisions already on the occasion of the European Council later this week.