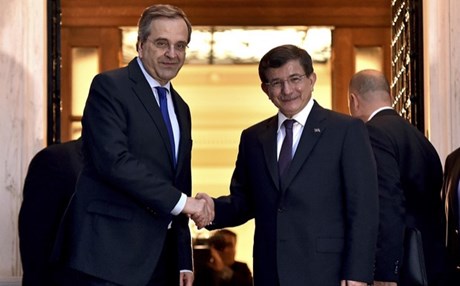 After a long dispute over divided Cyprus between Turkey and Greece, a new chapter in the relations between the two neighbouring countries may evolve based upon developments in the energy sector.

The gas discoveries in the Eastern Mediterranean and Russia’s scrapping of the South Stream Pipeline Project may be a catalyst to strengthen economic ties between Turkey and Greece. The Prime Ministers of the two nations, Mr. Ahmet Davutoglu of Turkey and his Greek counterpart Antonis Samaras, held talks in Athens over the weekend.

“Twenty years ago no one would have thought that the establishment of such an energy network would have satisfied both Turkey and Greece to this degree. And today we are greatly pleased, our energy corridors are merging,” Davutoglu said in the televised press briefing.

In a joint statement, the two countries stressed the importance of connecting the TAP (Trans-Adriatic Pipeline) and the Trans Anatolian Natural Gas Pipeline Project (TANAP) gas pipelines. It’s also said that Turkey and Greece are willing to cooperate further on connecting pipelines as well as electricity grid interconnection.

Last week, Turkey’s Energy and Natural Resources Minister Taner Yildiz has said that although Turkey is ready to open the energy chapter in Turkey’s EU membership process, EU officials are not planning to open the chapter. “We’ll go our way to make structural reforms in energy sector, whether EU will open chapter or not,” Yildiz said.

After natural gas discovery in the Eastern Mediterranean, Turkey is disputing the right of the government of Cyprus to develop its new found Aphrodite gas field. Since early October, Turkey has exploring natural gas fields in the area surrounding Cyprus. “Either it is located in the north, or in the south, or even in the Exclusive Economic Zone (EEZ), our seismic vessels will continue its explorations. This is an exploration for the whole Cyprus. We do not consider that the issue has turned into a crisis,” Yildiz said in November 18.

After Turkey sent the vessel, the Greek Cypriot government cancelled talks between the Turkish Republic of Northern Cyprus or TRNC, which has recognized only by Turkey since its establishment. Nicosia has threatened to veto Turkey’s accession talks with the European Union. Ankara has already irritated by the increasing cooperation between Cyprus, Israel, Egypt and Greece. The Turkish government has also warned these countries to avoid taking steps that will escalate tension in the eastern Mediterranean.

“No one can shut us out of the Mediterranean. We may conduct drilling if necessary,” Davutoglu recently said early this month. However, his tone softened after visiting Athens and he gave messages of cooperation between Greece and Turkey. “And God willing once the Cyprus issue is resolved we’ll stand shoulder to shoulder on the subject of energy corridors in the eastern Mediterranean,” Davutoglu said in the press briefing with Greek premier Samaras.

“In fact, both sides [Turkish and Greek Cypriots] agree that all the island’s natural resources belong to both sides. There is an agreement on that. What is important is how this process will be carried out by the two sides afterward. It’s important that they avoid unilateral moves,” Davutoglu said.

Meanwhile, Greek Prime Minister Samaras gave support for Turkey’s accession talks with the EU. “It is useful for our neighbour to belong to the European family. Provided of course it fulfils the European prerequisites and obligations,” Samaras said. Samaras also referred to Cyprus, saying he believed reunification talks would resume soon.

“Our aim is to bolster Greek-Turkish relations and, within this framework, to grow our trade and economic relations. Turkey is seeking stability and trust, which bring growth,” said Samaras.  The Greek Prime Minister said improved relations between Athens and Ankara could help increase bilateral trade. The bilateral trade volume has increased by 14% in 2013 reaching to $5.6 billion from $4.9 billion a year earlier. In the first 10 months of this year, the trade volume has slightly increased to $5.8 billion, according to Turksat data.

“In the final analysis, we are the gateway to Asia for Greece and Greece is our gateway to Europe. Greece is expressing its support for Turkish membership on every platform. It’s our hope that Turkey’s EU process will be finalized with the support of Greece,” Davutoglu said.