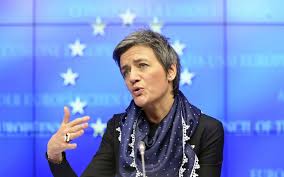 Greece will need to move fast and find a solution leading to competition in the country’s electricity market if the previous government’s part-privatization plan for PPC – through the sale of a new company, dubbed “Little PPC”, representing 30 percent – is to be rejected by the country’s new administration, the European Commission competition head official has stressed.

“If the plan for the establishment and sale of a ‘Little PPC’ is canceled, then this will lead to a revival of the case concerning PPC’s monopoly of lignite sources, both at European Commission and European Court levels, as the public utility remains dominant in the market with a 98 percent share,” remarked Margrethe Vestager, the European Commission’s antitrust boss, when asked to comment on the declared intention of Greece’s Production Reconstruction, Environment and Energy Minister Panayiotis Lafazanis, and his colleagues, to cancel the part-privatization plan.

Vestager’s comments, the first to be made by a European Commission official on the recently elected Greek administration’s new energy policy, were delivered during a seminar organized by the EU’s antitrust boss to discuss efforts being made by the European Commission Directorate General for Competition to heighten competition at both national and EU levels.

Vestager described PPC’s dominance in the Greek electricity market as a unique case within the EU, both in terms of the public utility’s degree of control and the unresolved case’s duration.

“If the government wants to keep the market closed to competition and does not propose another measure of equivalent effect, then fines will begin being imposed. The European Court’s decision last summer was clear,” remarked Vestager.

In 2009, the European Commission had requested that PPC surrender 40 percent of Greece’s lignite production to private-sector companies. The government at the time, led by George Papandreou, opted to offer the private sector unutilized lignite deposits in the country’s Drama and Elassona regions. The proposal was quickly shelved following strong reaction by local communities.

A European Court verdict last summer decided that Greece’s lignite deposits were not an exclusive PPC entitlement as third parties should also have access. The decision prompted Greece’s previous government, headed by Antonis Samaras, to ratify legislation for the PPC part-privatization plan, based on a preceding model applied by Italy’s Enel in 2000. The current leftist-Syriza led coalition government has openly declared PPC will not be sold.

Greece, however, will need to swiftly deliver an acceptable alternative as EU authorities are making clear that there is no more leeway for further delay.