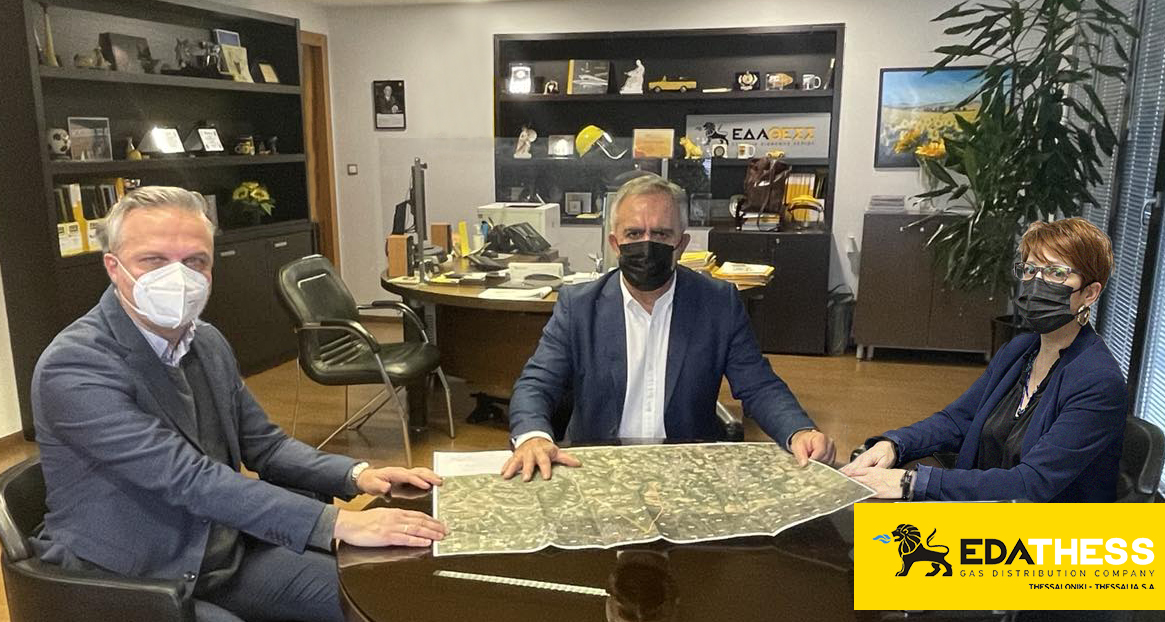 The beginning of the new year for EDA THESS is laced with the achievements of 2021 that verify the Company’s primary role in the natural gas distribution sector, as well as its strategic contribution to energy transition and the recovery of national economy. Going through a period marked by the impact of the pandemic and the surge of prices in the energy market, the Company safeguarded the uninterrupted continuation of its activities, recording robust results that will serve as compass for a new year of growth.

As the General Manager of EDA THESS, Mr. Leonidas Bakouras, pointed out, EDA THESS abided by the approved Development Program for the year 2021, fully implementing its €36 million investment plan, in compliance with the legal and regulatory framework and its Licenses. Thanks to its impeccable organization, strict planning and its commitment to goals, the Company concluded the construction of high-standard infrastructure and supplied all the new areas included in its planning.

The company continued the development of the natural gas market in the areas of its License with the same momentum, observing the principles of transparency and equal treatment of the Distribution Users and the End Consumers to promote fair competition. The year 2021 was a landmark for EDA THESS, as new Connection

Contracts reached a record high exceeding 26.000, increased by ~14% compared to last year, while natural gas penetration surpassed 65% of the population in the Licensed Areas. A proportional increase of 9% was also recorded in terms of the construction of new delivery points (Natural Gas Meters) that reached 24,877 in 2021. Equally remarkable was the increase in distributed volumes of natural gas, that amounted to 532.9 million Nm3, increased by 18.8% compared to 2020.

The Company continues with consistency to develop modern infrastructure based on technical-financial parameters, guaranteeing the sustainability of the distribution network. The targeted development planning of the Company is depicted on the high efficiency indicators of the network, as it currently distributes more than 216,000 cubic meters per kilometer of low-pressure network, while there is one activated consumer every 6.19 meters of network.

An integrated strategy ensuring a reasonable return on investments for the shareholders and resulting in low regulated charges and the reduction of the energy cost for all consumers. Through the extended use of natural gas, EDA THESS promotes energy saving for consumers, optimizes resource allocation and offers competitive advantages to enterprises and industries.

The operational readiness of EDA THESS remained high, thus shielding the smooth and uninterrupted operation of the distribution network. Along the 21-year history of natural gas in Greece, the Company has been ensuring the safety of natural gas infrastructure under any circumstances. At the same time, it maintains open channels of communication to provide information to consumers and stakeholders, establishing a culture of safe use of natural gas and thus, enhancing everyone’s trust to the Operator.

The multifaceted development program consistently implemented by EDA THESS, leverages investments in its areas of License and supports employment by creating thousands of indirect jobs along the value chain of natural gas. The Company pursues its strategy and redirects its targets, incorporating sustainable growth conditions to ensure a sustainable future. With a view to continuously deliver added value, the Company develops strategic alliances with all stakeholders, delivering multiple benefits to the society and the environment.

Corporate Responsibility stems from the principles and the values of the Company, emphasizing the active involvement of its people to the accomplishment of its strategic objectives. Through its sound corporate governance, the robust structure and the implementation of best management practices, EDA THESS safeguards a healthy working environment and a high level of know-how by constantly investing in its human capital.

According to the Manager of Natural Gas Market Development, Mr. M. Stergiopoulos, the natural gas network of EDA THESS currently covers all 14 Municipalities of the Regional Unit of Thessaloniki.

In 2021, new connection contracts in the Licensed area of Thessaloniki reached 17,194, showing an increase of 9.5% compared to last year. Total connections progressively reached 288,017. At the same time, the constructed delivery points in the Regional Unit of Thessaloniki currently amount to 284,254. Distributed volumes in 2021 were 330.5 million cubic meters, increased by 20% compared to 2020. More specifically, in terms of use, distributed quantities for domestic consumption amounted to 229.4 million m3, increased by 20.7%, while for commercial and industrial use, they reached 101.1 million m3, increased by 18.7%, compared to the same period last year.

At the same time, the average distribution tariff of EDA THESS in Thessaloniki was further reduced by 14.8%, compared to the previous regulatory period, while particularly for industrial consumers, the regulated charge was reduced by 45%.

New connection contracts of consumers in the Licensed area of Thessaly reached 8,823 recording an impressive increase of 24% compared to 2020 and progressively exceeded 123,934. This increase was supported by the Project for the replacement of oil heating systems with natural gas systems in Thessaly, that is implemented in the framework of the NSRF 2014-2020 for the Region of Thessaly and the executive NSRF structure of the Ministry for the Environment and Energy, with a budget of 6,12 million € – EDA THESS being in charge of receiving and evaluating applications as well of granting the certification and paying the subsidy.

With regard to industries, there is strong interest in the construction of High Efficiency Combined Heat & Power plants (CHP) as well as greenhouse plants. The average distribution tariff of EDA THESS in Thessaly was further reduced in 2021 by 21.9% compared to the previous regulatory period, while there was a radical decrease of 56% for industrial consumers.

In concluding, the General Manager, Mr. Leonidas Bakouras, states that “Despite the volatile environment prevailing due to the pandemic as well as to the energy crisis, we have come to the end of a successful year with 26.000 new connection contracts. It is a historic achievement that, on the one hand, verifies the sustained trust of consumers to natural gas and on the other hand, certifies the strategic potential of EDA THESS and its ability to identify and turn challenges into opportunities. We continue to implement our investment program with consistency to develop sustainable networks and to provide safe access to natural gas, the main transitional fuel in the following years”.