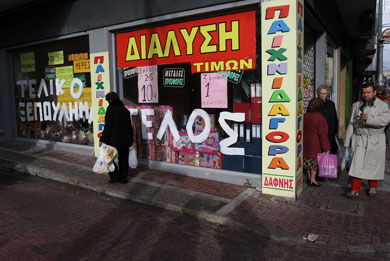 Greece΄s creditors are testing the country΄s endurance — again. If they keep pressing, they could split the euro area apart, which would be a disaster for them as much as for Greece. They need to stop insisting on the impossible, and find a way to relieve the country΄s debts.According to Bloomberg View’s editorials, the European Commission, the European Central Bank and the International Monetary Fund have told the government of Prime Minister Antonis Samaras to cut the country΄s debt burden, the biggest in the euro area, by reducing public spending even further. In return, they propose a last injection of bailout money and an emergency credit line.The offer is toxic because further efforts to reduce debt through fiscal tightening are almost certain to fail. And that΄s assuming they don΄t plunge the country into political instability, as they well might. Polls suggest that the radical left-wing Syriza party, led by Alexis Tsipras, is in a strong position to replace Samaras΄s moderates in elections next year. (A few months back, Syriza rode a wave of anti-Europe sentiment to victory in elections to the European Parliament.)Over the past five years, Greece has turned its primary budget balance (which excludes interest payments) from a deficit of 10.6 percent of gross domestic product to a surplus of 1.5 percent — a difference of more than 20 billion euros a year. This rare feat suggests an impressive, albeit long overdue, dedication to fiscal control. But the fiscal squeeze has hurt the economy. Greece΄s output has fallen by roughly a fifth and the unemployment rate stands at more than 25 percent, Bloomberg View’s editorials explains.Lately the economy has started to grow again, but a further round of tightening puts the expansion at risk, possibly putting the goal of reducing the debt-to-GDP ratio further out of reach. That ratio is currently 180 percent; the target for euro-area countries is 60 percent. By itself, fiscal austerity simply cannot close this gap. Even if growth proceeds apace and borrowing costs stay manageable, the government would have to reach and maintain a primary surplus of 7.5 percent of GDP over the next 15 years. No euro-area country has ever come close to doing that.If too much austerity puts Syriza in charge, expect an end to fiscal discipline. The damage, though, won΄t stop there. The entire European project will be endangered. Tsipras might be willing to force losses on creditors unilaterally. Rising opposition parties in Portugal and Spain are similarly inclined, and they are watching closely. If markets begin to fear a wave of defaults, the resulting turmoil could thrust the whole of Europe back into crisis.The fiscal arithmetic isn΄t hard to understand. In the end, one way or another, Greece΄s debts will be written down, and this is widely understood. Debt forgiveness achieves this result in an orderly way and with minimum collateral damage. The costs of the alternative — a disorderly default — could be enormous. Official lenders such as Germany and France have become the government΄s biggest creditors and must lead the way. The sooner they recognize the need for relief, the better their chances of heading off a far worse calamity.